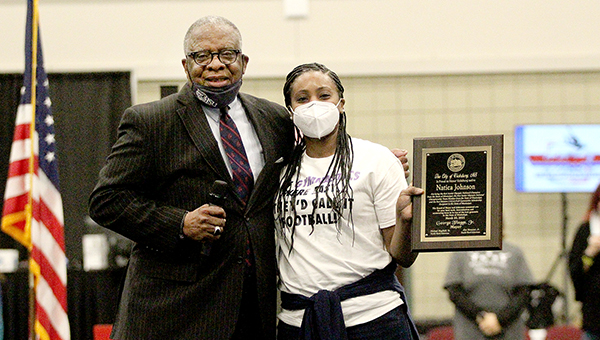 The days when Natica Johnson could fly through the air or spring across the floor with the greatest of ease are probably long gone, but on Saturday they surely were not forgotten.

Johnson, a Vicksburg native who is the only Mississippian to compete for the USA Gymnastics Junior Olympic National Team, was honored by her hometown on Saturday.

Johnson received a plaque commemorating her achievements in the sport, as well as a proclamation from the Board of Mayor and Aldermen, at the 2021 Mississippi State Championship meet at the Vicksburg Convention Center.

The state meet began Friday and will continue through Sunday afternoon.

“Very surprised. Nobody told me about this. I would have been nervous,” Johnson said of receiving the award. “It means a lot. I’m still surprised that somebody actually calls me to come back since I’ve been out of the sport for so long. It just means so much for me to come back and show my face.”

Johnson now works for a large healthcare firm in the Atlanta area, but 20 years ago she was one of the top young gymnasts in the country.

Johnson was selected to the Junior Olympics program in 1997 and competed at the Level 10 National Championships in 2000. Gymnastics ability is rated on a scale of Level 1 for beginners to Level 10 for college-level athletes, making Johnson one of the best amateurs in the country.

She went on to compete for Auburn University and set several school records during her career.

In 2004, she posted the top all-around score in school history in a meet against Florida — the record was broken a couple of years later — and was named the Southeastern Conference’s Gymnast of the Week. Johnson graduated from Auburn in 2006 with a degree in psychology.

Johnson said receiving the award on Saturday, surrounded by other young gymnasts aspiring to reach the heights she did, put a smile on her face.

“It takes me way back. I wish I could, one more time, fly through the air,” she said.

“The board of Mayor and Aldermen commend you for your hard work, determination and unwavering focus to be one of the best gymnasts in the state of Mississippi.”

Vicksburg mayor George Flaggs Jr. presented Johnson with the plaque and said she is an example of what can be achieved with hard work and dedication.

“It was a great honor to not only recognize a native Vicksburger, but a native Mississippian that represented us on a national and international stage. I’ve known this family, so it was my highest honor,” Flaggs said. “It says to the rest of Vicksburg and the rest of this state what you can accomplish. It’s not where you come from, it’s where you want to go.”