Mississippi State advances to second round of NIT 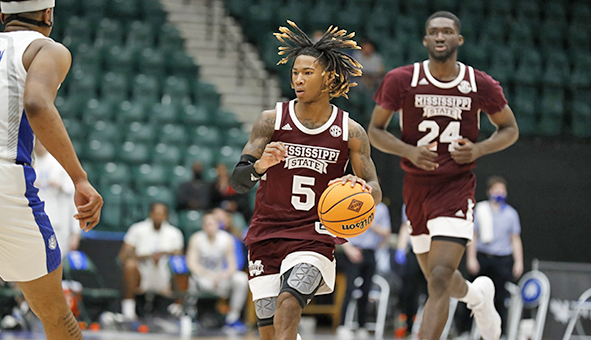 FRISCO, Texas (AP) — Mississippi State kept the upset train rolling in the first round of the NIT.

D.J. Stewart Jr. scored 20 points, Iverson Molinar added 19 and Mississippi State defeated top-seeded Saint Louis 74-68 on Saturday to wrap up the first round of the NIT.

The Bulldogs (16-14) advanced to the quarterfinals on Thursday against Richmond (14-8).

Mississippi State was the second No. 4 seed to knock off a No. 1 in the 16-team tournament, and the fourth lower seed to win in the eight first-round games.

“We beat an outstanding team today,” Mississippi State coach Ben Howland said. “They have seniors who have been through all the wars before that are their three best players. I thought our guys did a fantastic job defensively, especially in the first half, and we did some important things in the second half … Overall, it was a great team win. We’re really excited to get this one to allow us to continue our season against Richmond on Thursday.”

Derek Fountain added 10 points for the Bulldogs, who were 14-of-17 from the foul line in the second half, with Stewart going 3 of 4 in the final 39 seconds to clinch the win.

Molinar hit four free throws in less than a minute and Fountain shook free for a dunk to put the Bulldogs on top 66-59 with 4:49 to play, but a rash of turnovers allowed Saint Louis to cut the deficit 71-68 with under a minute to play.

After the last turnover, Cameron Matthews made a acrobatic steal to get the ball back, allowing Stewart to wrap it up.

“When I’m in, I just try to do the best I can with the time I have. My role on the team is just to play defense and make play,” said Matthews, who had two points, two assists, two steals and six rebounds in 18 minutes of playing time.

Javonte Perkins scored 21 points for the Billikens (14-7), who were playing in their 19th NIT but first since 2004. Hasahn French added 17 points and 10 rebounds, Jordan Goodwin scored 14 and Terrence Hargrove Jr. 10.