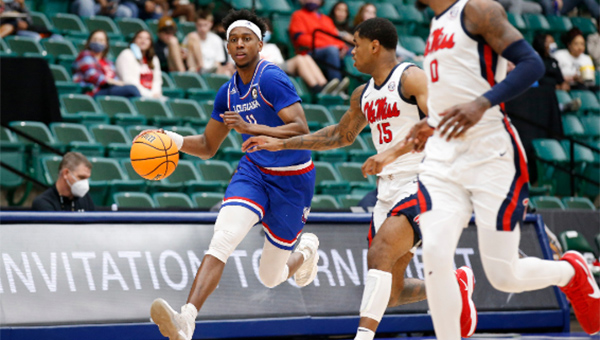 FRISCO, Texas (AP) — Ole Miss’ roster was short, and so was its time in the NIT.
Freshman Kenneth Lofton Jr. scored a season-high 22 points with seven rebounds, and Louisiana Tech beat short-handed Ole Miss 70-61 on Friday night in the first round of the NIT.

Louisiana Tech (22-7) will play Western Kentucky on Thursday in the quarterfinals.

Louisiana Tech also earned its first win over Ole Miss since 1964. Ole Miss (16-12) had won five meetings between the teams since then, the last in 2015.

“I told our team at halftime, we got into a weird place where our offensive struggles were affecting our defense,” Louisiana Tech coach Eric Konkol said. “We had to get back to being gritty and tough on the defensive end. That is what we did in the second half.”

Ole Miss was without Devontae Shuler, the SEC’s active leader in career steals (185) and career assists (329), due to family reasons, and KJ Buffen, who entered the transfer protocol earlier in the week.

Forwards Khadim Sy and Dimencio Vaughn also left the program ahead of last week’s Southeastern Conference Tournament, leaving the top-seeded Rebels with only eight scholarship players and vulnerable to an upset.

Despite those absences, however, Ole Miss led 37-27 at halftime.
Lofton scored 11 points in the first 10:13 of the second half to spark Louisiana Tech’s 22-4 run for a 49-41 lead. The Bulldogs scored 15 straight points during the run, opened and closed by Lofton. Ole Miss started the half 2-of-13 from the field.

“They did not double team me, so it was my time to shine out there,” Lofton said. “I showed them what I have and what I can do.”

Neither team made a field goal in the final two minutes. Louisiana Tech made 7 of 8 free throws down the stretch to seal it.

Amorie Archibald scored all 14 of his points in the second half, and he added seven assists for Louisiana Tech. Kalob Ledoux added 10 points and Cobe Williams, with a broken finger on his left hand, scored eight.

“Cobe is a special human being,” Konkol said. “Last week during the conference tournament, that injury was still fresh and he did not know exactly what he could do. This week, he practiced all week and shot all week. He figured out what he could do. He is the engine, the heartbeat of this group and we saw a really gutsy performance from him and our team in the second half.”

Jarkel Joiner led Ole Miss (16-12) with 22 points. Luis Rodriguez scored all 10 of his points in the first half.

Joiner sank a 3-pointer just before the halftime buzzer to extend Ole Miss’ lead to 37-27. He had 11 points in the first half and Rodriguez grabbed seven rebounds as the Rebels held a 23-13 advantage on the glass. Ole Miss was behind 18-8 before Joiner scored five points during 12-2 run to tie it.

Warren Central’s bats returned from vacation a little early, and the Lady Vikes got ready for the real work of... read more