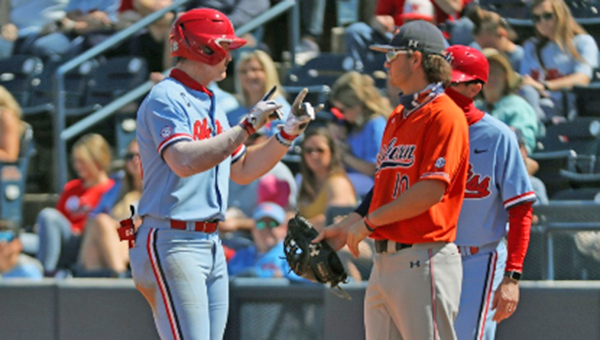 Ole Miss led 14-0 through seven innings. Auburn scored nine runs in the eighth inning and two more in the ninth, but never got closer than five runs.

“You just can’t spot a top-five team at their place six or seven runs right out of the gate and expect to come back and win those ballgames no matter how much you try to compete with your at-bats throughout the ballgame,” Auburn coach Butch Thompson said.

Ole Miss (16-4, 3-0 Southeastern Conference) swept its first SEC series of the season since 2004. After being retired in order in the bottom of the first inning, the Rebels got their first five batters on base in the second and went on to score seven runs.

Peyton Chatagnier hit a two-run double and Gonzalez followed with a two-run single for a 6-0 lead. Gonzalez then scored on a double by Tim Elko.

A solo home run by McCants was part of a three-run rally in the fourth inning that extended the Rebels’ lead to 10-0, and they scored four more in the sixth to make it 14-0.

Auburn finally got rolling late. Tyler Miller hit a two-run double and Brayton Brown hit a three-run homer as the Tigers collected eight hits and scored nine runs in the top of the eighth.

Ole Miss answered right back, however, with five runs in the bottom of the eighth — two of them coming in a double by McCants — to make it 19-9 and once again put the game out of reach.

Auburn (11-8, 0-3) used seven pitchers in the game, who combined to issue 11 walks. None lasted more than two innings.

Derek Diamond (2-2) earned the win for Ole Miss. He pitched six shutout innings, allowed four hits and one walk, and struck out six.

Ole Miss will play again Tuesday, at home against Central Arkansas at 6:30 p.m. It will return to SEC competition Thursday against Alabama. The opener of the three-game series in Tuscaloosa will be televised by ESPNU, and Saturday’s finale is on SEC Network.