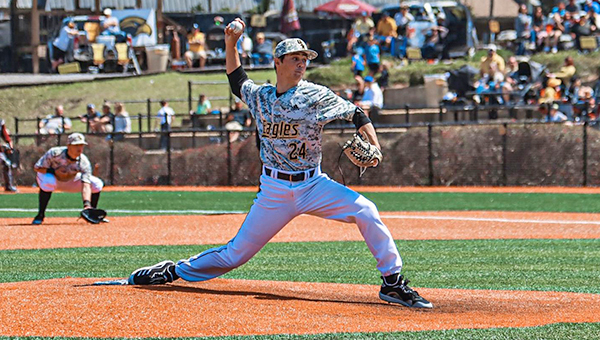 The freshman right-hander retired the first 16 batters he faced, and the Golden Eagles scored all of their runs early in defeating Missouri State 3-1 Sunday afternoon to complete a three-game sweep.

Southern Miss’ pitchers combined to allow two runs, 11 hits and four walks in the series. Ethridge pitched seven innings in Sunday’s finale, and allowed one run while walking none and striking out six.

Tyler Stuart and Garrett Ramsey finished up, with Ramsey working a perfect ninth inning for his sixth save of the season.

Ethridge allowed just two hits — an infield single in the sixth to break up his perfect game and a home run by Ben Whetstone to open the seventh. It was Whetstone’s second homer of the year.

“It’s my favorite thing whenever I get in a groove and people can’t hit me, because I just keep going. It seems like they get upset when they get out, and I’m always smiling so they just look at me and can’t help but laugh at me when they get out,” Ethridge said. “Those guys were really swinging and they were not easy to strike out. If it was a strikeout, they weren’t doing it looking. It was more of trying to focus on getting weak contact and hitting my spots so it was easy plays for the defense.”

Southern Miss (12-6) has won eight of its last nine games. In addition to Ethridge’s pitching performance, it won Sunday by jumping on Missouri State (6-8) for three runs in the first three innings.

Gabe Montenegro led off the bottom of the first with a single to center and scored one batter later when Reed Trimble tripled to right. An RBI ground out by Charlie Fischer followed as Trimble scored.

Trimble then drove in the Golden Eagles’ last run in the third with a sacrifice fly to score Dustin Dickerson. Dickerson led off the inning with a single, went to second on a sacrifice bunt, and then stole third.

Southern Miss only had four hits in the game, and none after the third inning. Missouri State starter Logan Wiley (3-1) hit two batters and intentionally walked another in the fifth inning, but retired the side in order in the fourth, sixth and seventh.

“It’s good any time to get a sweep. It’s even better of a feeling when you can get a sweep on back-to-back weekends,” Trimble said.

The Golden Eagles return to action Tuesday when they travel to Alabama for 6 p.m. game.

BATON ROUGE, La. — After three days in the freezer, LSU’s hitters warmed up just in time to salvage something... read more