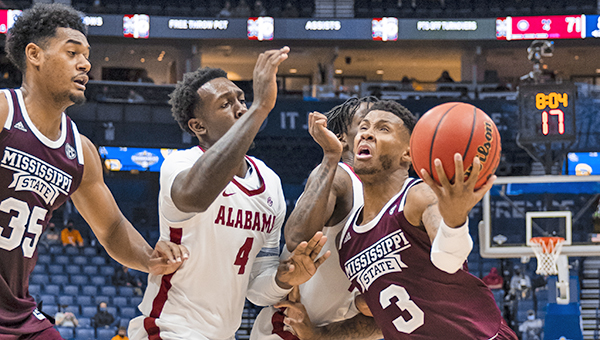 Mississippi State's D.J. Stewart (3) tries to put up a shot against Alabama's Juwan Gary (4) during an SEC Tournament game last week. Mississippi State played Saint Louis in the NIT on Saturday, while Alabama took on Iona in the NCAA Tournament. (Courtesy of the Southeastern Conference)

The NCAA men’s basketball tournament gets under way this weekend — otherwise known as America’s best four-day weekend of the year.

The NCAA cheated us a bit this year by moving the start of the tournament back a couple of days. The play-in games were Thursday night and the real action started Friday. The first Thursday of the tournament has practically become a holiday known as “National Slack at Work Day,” as millions of people stream games and scour box scores to keep up with the first few games.

It’s most likely because of the COVID-19 bubble the tournament is being played in this year — all of the games are at a handful of sites in Indiana rather than spread around the country — but the conspiracy theorist in me thinks the NCAA finally caved after years of listening to all of those awful news stories about how much productivity is lost each year when March Madness begins. Major corporations are sponsoring this event, and they must get their time and money back.

Even though we still have the Friday games to watch, a three-day weekend is never as good as a four-day weekend.

And, of course, while the NCAA Tournament gets all of the attention the NIT chugs along in relative obscurity. Mississippi State and Ole Miss fans might want to pay attention since both teams are in it. Ole Miss played Friday night and Mississippi State on Saturday. A couple of other teams from our region, like Louisiana Tech and Memphis, are also in it.

The NIT is a consolation prize that nobody wants. It’s like winning a wheelbarrow as a Zonk prize on “Let’s Make a Deal” and then actually having to cart the thing home. I mean, yeah, you have a wheelbarrow and that’s useful, but even a junker of a car is better than that.

The NIT never gets any love. Players weep with joy when they get to go to the NCAA Tournament and get a slim shot at their one shining moment. People everywhere fill out NCAA Tournament brackets — The Vicksburg Post is even running a contest, in case you haven’t heard — but no one brags about nailing the upper left quadrant and winning their NIT pool.

Even farther down the ladder is the College Basketball Invitational. This abomination has been around since 2007, and is for the teams too mediocre to even make the bottom of the NIT field. It is the cockroach of college basketball postseason tournaments — it’s disgusting and you can’t kill it.

Eight teams, most of which sound like they were named after subdivisions and three of which have losing records, are in it this season. Washington State and UTSA had the dignity to turn it down, but Army, Bellarmine, Longwood, Stetson and Pepperdine were among those that had nothing better to do.

I consider myself pretty knowledgeable about college sports and even I have to admit I had to look to see where Bellarmine is.

It’s in Louisville, Kentucky, in case you were wondering.

So wherever your team landed, whether it was the Big Dance, the Dull Dance, or the 3 a.m. Pickup Truck Parking Lot Rave at Kroger, enjoy it while it lasts. Take a day or two off work to soak in the last shining moments of the college basketball season.

Now, if you’ll excuse me, I need to go fill out my NIT bracket while there’s still time.