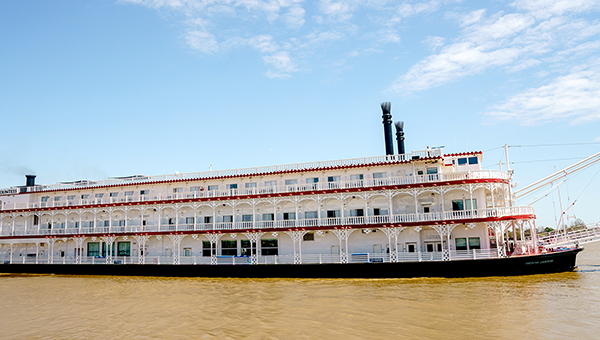 NEW ORLEANS — American Queen Steamboat Company christened the American Countess Sunday, adding the Countess to the fleet of riverboats the company operates. The christening follows the recent return to service by the company after a year away from cruising due to the pandemic.

The company’s American Duchess was the first to return to service and made a stop in Vicksburg Friday.

According to the Vicksburg Convention and Visitors Bureau’s schedule, the American Countess is scheduled to make her debut visit to Vicksburg on March 30 during her maiden cruise on the Mississippi River.

“As we celebrate the grand debut of the American Countess, I could not be more appreciative of the incredible team that made it possible,” John Waggoner, founder and CEO of American Queen Steamboat Company, said. “We listened to our returning guests’ feedback on what they would like to see in a new riverboat and created a contemporary American masterpiece that guests are eager to experience.”

Built using the existing hull of former gaming vessel the Kanesville Queen, the American Countess was lengthened by 60-feet and underwent a total renovation in the Gulf Island Shipyard in Houma, La.

According to the company, the American Countess’ “sleek, contemporary design offers plenty of open space for guest gatherings, especially the portside bar, which will delight guests with an 80-foot panoramic view. With four decks, including a Sun Deck, and 123 inviting staterooms in four categories, this paddlewheeler is a home away from home on six- to 15-day itineraries.”

American Queen Steamboat Company resumed its operations with newly enacted health and safety protocols which include, but are not limited to, mask mandates in all public areas where social distancing is not possible, 100 percent testing of all guests and crew and mandatory COVID-19 vaccination for all guests and crew that will go into effect for all sailings beginning July 1.

“Year after year, American Queen Steamboat Company has played an essential role in the U.S. river cruising renaissance benefitting the state of Louisiana from building boats in our shipyards, showcasing our iconic river cities and quaint towns to putting a spotlight on our state through its marketing efforts,” Louisiana Lt. Gov. Billy Nungesser said.