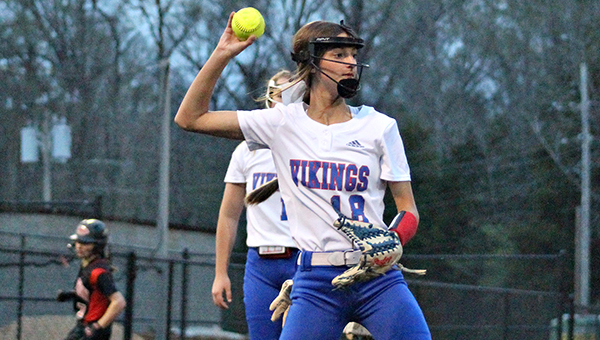 While they were trying to mount one last, desperate rally Monday night, the Warren Central Lady Vikes were also kicking themselves over what got them in that situation in the first place.

A crucial error that allowed two runs to score. A couple of passed balls that put runners in scoring position and let the deficit grow. Two of their own runners thrown out trying to score.

The mistakes piled up over the course of the game and, combined with a 17-hit onslaught by Clinton, proved to be the difference in an 11-8 loss to the Lady Arrows in their MHSAA Region 4-6A fast-pitch opener.

“We haven’t been making multiple errors in a game, and then tonight we did and obviously it cost us a ballgame,” Warren Central coach Dana McGivney said. “You have to just say it happened, it’s over, it’s done, and you can’t dwell on it.”

Rowan Braley also homered, going back-to-back with McKinley in the fifth inning, and finished 4-for-5 with three RBIs.

McKinley and Braley helped Clinton to quickly turn a 3-1 deficit after two innings into an 11-3 lead after 4 1/2.

The Lady Arrows blew the game open with five runs in the fourth inning. The last two came on what should have been an inning-ending double play. With runners at first and third and one out, Bailey Jenkins lined out to WC shortstop Sarah Cameron Fancher, and Braley was caught well off of first base.

Fancher’s throw skipped past the first baseman and down the right field line, however, and both runners scored to make it 8-3.

McKinley then hit a two-run home run and Braley followed with a solo shot in the top of the fifth to make it 11-3. 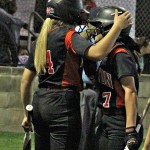 “I like for us to score every inning, and we didn’t. We had too many zeroes on the board tonight. It’s just a matter of being more confident every at-bat,” McGivney said. “And then (Clinton) only had three innings that they didn’t score. The second, third, fourth, fifth inning they were putting up runs, and that puts you in a hole. But, again, a lot of that was on our errors as well. Don’t make those mistakes and it’s a much closer game at least.”

Despite being on the brink of a run-rule loss, Warren Central battled back and made things interesting. It kept Clinton scoreless through the last two innings, scored three runs of its own in the bottom of the fifth, and then mounted a final rally in the seventh.

Jill Smith hit a sacrifice fly and Mary Evelyn Hossley an RBI single to cut it to 11-8. One runner was thrown out trying to score from second on a hit, however, and Annalyn Nevels ended the game with a hard line drive to center that was snagged by Braley for the last out.

Abby Morgan led Warren Central at the plate with two hits and one run scored. Kamryn Morson doubled, drove in a run and scored two. The Lady Vikes only had eight hits in the game, but took advantage of seven walks, two hit batters and three errors to generate plenty of scoring chances.

“The fact you get down five or six and come back. A three-run deficit is way easier to make up than five, six or seven runs,” McGivney said. “So I’m proud of their fight. They didn’t quit, they didn’t give in, they kept working. We clean up our defense and we’ll be OK.”