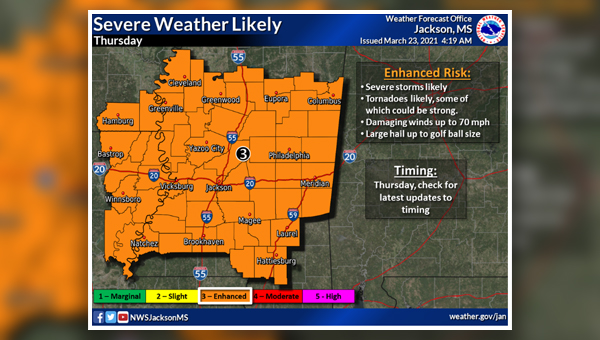 Another round: Central Mississippi under the gun once again for severe weather

For the second week, Warren County and Vicksburg are under the gun for potential severe weather as another system prepares to make its way across the state.

The National Storm Prediction Center in Norman, Okla., is forecasting an enhanced risk for severe weather for parts of the lower-Mississippi Valley into the Mid-South that includes central Mississippi.

Ashlyn Jackson, a meteorologist with the National Weather Service Office in Jackson, said there is an enhanced risk Thursday for severe storms with the threat of strong tornadoes, lightning and damaging winds up to 70 mph.

“We don’t have an exact time when it will arrive,” she said. “It could be all day and into the night; we’ll know more later and will update (Wednesday).”

Warren County managed to survive the severe weather that hit the area last week with minimal damage and Elfer said he is concerned the experience may cause people to not take this next round of weather seriously.

“People cannot get complacent,” he said. “They need to be ready. We’re not crying ‘wolf!’ We’re trying to give people information.

“They need to have two ways to get alerts, have their emergency supply list, have adequate shelter and watch the radar,” Elfer said. “They need to pay attention to the weather.”

The Mississippi River is expected to crest at its 43-foot flood stage on April 2 and then experience a slow... read more