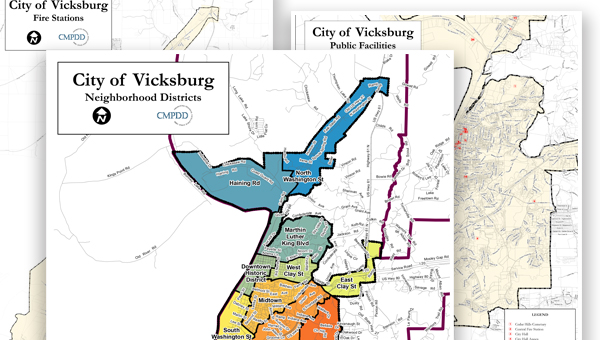 Representatives for Trilogy Engineering outlined their plan for developing a water optimization and master plan study of the city of Vicksburg’s water system and the surrounding rural water districts.

The engineers presented their plan Tuesday at a meeting with city officials, Warren County Board of Supervisors President Dr. Jeff Holland and officials from the Culkin, Yokena-Jeff Davis and Hilldale Water districts at the Vicksburg Auditorium.

Public Works Director Garnet Van Norman, water and gas superintendent Dane Lovell, and two board members from each of the county’s five water districts comprise a committee to work with Trilogy on the study.

“The intent is to get this (study) done in 90 days from today,” said Harold Underwood, business development president for Trilogy. “There’s a lot that we do know (about the system) and a lot that we don’t know.”

Underwood said the engineers have seven tasks to perform for the study, adding at the result will be a 10-year capital improvement plan of projects to improve the water system and better serve the community.

“This is a look forward while at the same time we’re going to look at how to optimize the system to make it operate better, make it more resilient and serve your citizens better,” he said.

Project manager David Peters said part of the study examines the system to see where there have been system failures and service problems.

A lot of the information on the system, he said, is in the data collection, which is one of the study’s initial tasks.

“When you look at Vicksburg and look at the records, you’ve got a perfect score; there is no problem there,” Peters said. “But when people are out of water for three days, there is this problem that you need to look at, try and identify it and work out a plan to try and fix the problem.”

From what the engineers have seen — the size of the water plant, the wells — “everything in Vicksburg looks positive as far as the basic system and your capacity,” he said.

Peters said the engineers will collect the data and prepare a summary of findings that will identify the system’s weaknesses — “where you need something else.” A performance evaluation of the system will follow the summary to determine the system’s efficiency.

“Some of the things we’re going to be looking at (in the evaluation) is not only the big catastrophe where the whole system goes down but in one neighborhood, or is one neighborhood better served than another in Vicksburg.”

The recommendations to improve the system will follow the survey. The final items will be the 10-year capital improvement plan and a final report.

Underwood said the engineers will need help from the officials to make the study successful.

“We need input,” he said. “We can’t do this without you. You have more knowledge than any of us.”