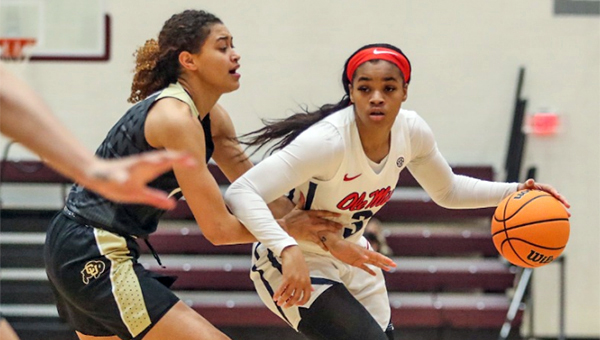 COLLIERVILLE, Tenn. — It’s not the Final Four the Ole Miss women’s basketball program aspires to reach one day, but for now it might as well be.

Colorado erased nearly all of what was an 18-point deficit to force an exhilarating finish, but the Ole Miss defense stood firm to secure a 65-56 victory in the Women’s NIT quarterfinals on Monday.

Ole Miss (14-11) advanced to the WNIT semifinals for the first time in the program’s history. It will play Northern Iowa Friday at 7 p.m. in Collierville, Tennessee. The game will be broadcast online through streaming service FloHoops.

Rice and Delaware will play in the other semifinal Friday at 4 p.m. The championship game is Sunday at 1 p.m.

“I was definitely there for those low-lows, but you have to trust the process and stick with it,” said Ole Miss’ Mimi Reid, who had nine points and four assists. “I happen to be one who stuck with Coach Yo and this staff and just believed in the program and believed that she was going to turn this program around. We didn’t think it was gonna happen this quick, but we’re gonna ride with it and keep doing what we need to do every single day.”

Ole Miss started off slow against a deep Colorado (12-11) team, but a spectacular second quarter in which the Rebels shot 73.3 percent and went on a 28-4 run helped push them to a 16-point halftime lead. It was 54-39 heading into the fourth quarter.

Colorado, despite being in immense foul trouble, would not go quietly, though. The Buffaloes slowly chipped away to cut it to a three-point game with 2:13 to play. That was when an already ferocious Rebel defense re-emerged, with a crucial block by Madison Scott at the 1:18 mark.

A momentum-shifting putback by Caitlin McGee with 37.8 seconds left started to seal the door, but it was Rebel stalwart and point guard Reid who helped ice the game by going 5-for-8 from the free throw line in the fourth quarter.

Ole Miss head coach Yolett McPhee-McCuin missed her third straight game of the WNIT due to a positive COVID-19 test last week. She is expected to return for Friday’s semifinal game against Northern Iowa.

The Rebels have held their three WNIT opponents — Samford, Tulane and Colorado — to only 54 points per game and a paltry 7-of-38 shooting from 3-point range.

“First of all, great challenge and game by Colorado,” said acting head coach Shay Robinson, who was filling in for McPhee-McCuin. “Two of the top NET teams in the tournament battling it out. We knew even if we did get a lead that they were going to come back swinging and try to get us uncomfortable,” Robinson added. “I’m so proud of this team, I’m so proud of the staff coming together. With Coach Yo being apart, it was just about us upholding a standard, and representing Ole Miss the way we’ve been doing all year.

Four Rebels scored in double-digits on Monday, led by another superb outing from All-WNIT Regional team member Donnetta Johnson and her 15 points. Across three games she averaged 13.3 points and shot 47 percent from the floor. Joining her on the All-Region team was Shakira Austin, who recorded her third straight double-double of the tournament at 12 points and 10 rebounds.

Collins knocked down three 3-pointers for the ninth time this season in a game that featured her as one of two top-10 ranked freshmen in t3hree-point shooting alongside Colorado’s Frida Formann (19 points).

“I just want to do well for my teammates and my coaches,” Scott said.

“My coaches challenged me to do well from the beginning, I have a tendency to ease into things and take the slow route sometimes where it takes me until the second half or the fourth quarter to get going.”