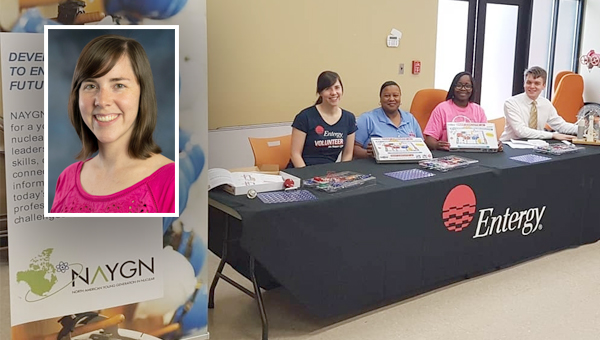 JACKSON — Teamwork allows brainstorming opportunities for co-workers to exchange ideas, build collaborations and come up with solutions to overcome obstacles. Elizabeth Smith, an administrative specialist in the design engineering department at Entergy’s Grand Gulf Nuclear Station, consistently recognizes the value of teamwork at the plant and across the nuclear fleet.

“The most important aspect of teamwork is to treat everyone with dignity and respect. When people feel valued, that makes them more willing to participate,” Smith said.

Smith’s enthusiasm led her to become the Grand Gulf chapter president of North American Young Generation in Nuclear. The organization referred to as NAYGN, helps develop future leaders in the nuclear industry. It equips the young generation of nuclear enthusiasts with leadership training, creates connections, engages and informs the community on the nuclear industry and inspires today’s nuclear technology professionals to meet the challenges of the 21st century.

Smith organizes and leads NAYGN volunteers to participate in various events such as supporting science, technology, engineering, and mathematics at schools and community service projects.

“NAGYN members have become a cohesive group where we share ideas, help the community and develop our skills as nuclear professionals,” Smith said.

She joined Entergy in December 2016 as a contractor, then as an employee in September 2017. In her current role, she supports the engineering department.

“I review engineer documents, prepare meeting agendas, track budgets, do records-keeping and any other work needed to support the department,” Smith said.

Smith cites several mentors at Grand Gulf who have been examples of teamwork, including Bob Franssen, Grand Gulf site vice president, and Greg Hawkins, who recently retired as the regulatory assurance and performance improvement director. Her supervisor, Michael (Brandon) Taylor, design engineering manager, “understands everybody has strengths and weaknesses. He sees professional development opportunities. That makes us a stronger organization,” Smith said.

“Elizabeth is a key member of the design engineering team. She ensures that we recognize team members for their accomplishments, which fosters a culture of appreciation and motivation,” Taylor said.

Upon starting her career at Grand Gulf, the concept of teamwork came naturally to Smith. She was part of a big family – five sisters and three brothers.

“I’m No. 5 five among my siblings. To achieve anything with excellence, you have to be able to work with other people. If not, only one person carries the weight. Being part of a large family taught me that,” she said.

Smith grew up in the world of nuclear power, as her father served in the nuclear Navy and later worked as a Nuclear Regulatory Commission resident inspector. That’s what brought the family to Mississippi. Now, Smith has made Vicksburg her home.

“I knew of the importance of nuclear as a baseload energy source and a safe form of producing power,” she said. “Yet, I’m always learning. As part of my development plan, I recently audited a systems’ training class to gain more knowledge and understanding on how power plants work.”