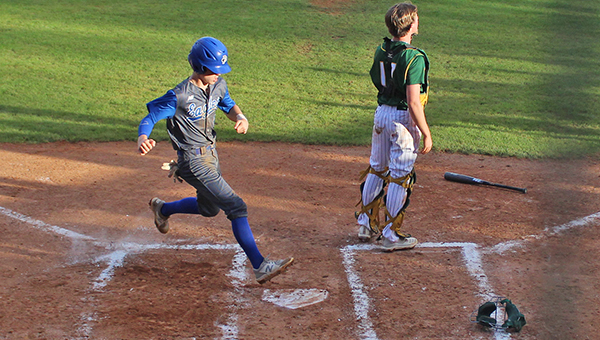 Porter’s Chapel Academy kicked the ball around Tuesday night, and its status as a first-place team went right with it.

The Eagles committed six errors that led to 10 unearned runs, and they suffered their first district loss of the season in falling 17-5 to Manchester Academy.

John Wyatt Massey and Zach Ashley each had two hits and an RBI for PCA, and Gage Palmer scored two runs. The Eagles had eight hits total and kept up for a while — Ashley’s RBI single gave them a 2-1 lead after one inning, and Thomas Azlin had another RBI single in the fourth that trimmed their deficit to 7-4 — but the errors and a mounting pitch count for their star pitcher Palmer ultimately did them in.

Palmer left the game after throwing 106 pitches in 5 2/3 innings. He allowed 11 hits, but only walked two batters and struck out seven. Only three of the nine runs he allowed were earned.

Two relievers followed Palmer and gave up eight runs — five of them earned — on five hits and four walks in 1 1/3 innings.

PCA and Manchester will play again Thursday at 6 p.m. in Yazoo City.

Jacob Martin also went 3-for-4 for the Trojans, with a double and three RBIs. Kayne Romero and Walker Sullivan both hit RBI triples and scored one run each.

Sullivan’s RBI triple capped a five-run first inning. Romero’s triple was part of a nine-run rally in the bottom of the fourth.