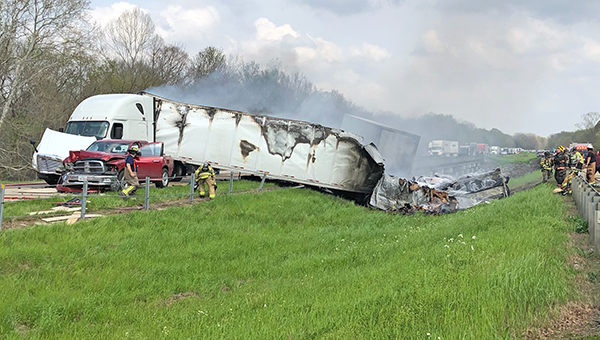 An 18-wheeler and a pickup truck sit in the median after a fiery wreck on Interstate 20 westbound, near mile marker 17, on Thursday afternoon. (Submitted to The Vicksburg Post)

Interstate 20 in both directions near the Big Black River was shut down Thursday afternoon as emergency units responded to a serious accident that involved at least five vehicles.

One lane of eastbound traffic reopened just before 4 p.m., but both westbound lanes were expected to remain closed for several hours. An 18-wheeler that caught fire was sprawled across the median and westbound lanes. A cause of the accident is not known, but an earlier wreck near westbound Exit 15 at Flowers — another 18-wheeler overturned on the right shoulder — had slowed traffic for most of the day.

Emergency units have said the response to the fire will last hours and have called for additional supplies and equipment to support efforts to deal with multiple vehicle fires.

Response to the accident has been hindered due to the location of the accident and the inability of some responding units to get around backed-up interstate traffic.

One injured individual has been transported, and an unknown number of other people were injured. The severity of those injuries is not yet known.