The death toll from Thursday’s wreck on Interstate 20 grows 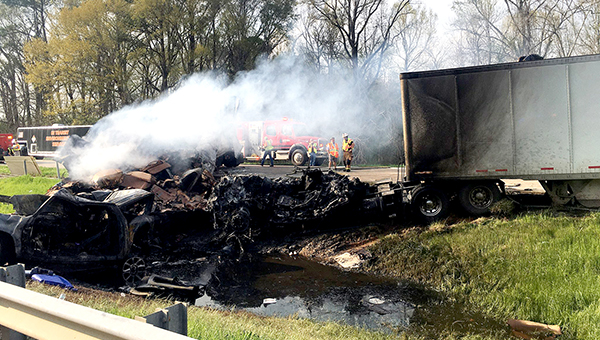 The smoldering wreckage of mutliple vehicles is seen in the median of Interstate 20 near mile marker 17 near the Big Black River Thursday afternoon. Three people were killed when six vehicles collided just before 2 p.m. Interstate traffic in both westbound and eastbound lanes was shut down as emergency units responded to the wreck. (Submitted photo)

According to the Mississippi Highway Patrol, eastbound Interstate 20 near mile marker 17, close to the Big Black River, was open, while only one westbound lane was open.

The wreck, which is now confirmed to have killed three people, occurred about 1:51 p.m. Thursday in the westbound lane of I-20 at the Big Black River bridge. Vicksburg Fire Chief Craig Danczyk said three people injured in the wreck were taken by ambulance to hospitals in Jackson; one to the University of Mississippi Medical Center; and two taken to Merit Health Central Mississippi. He did not have information on the injuries.

Mississippi Highway Patrol spokesman Trooper Kervin Stewart said the wreck occurred in the westbound lane of Interstate 20 while traffic was stopped because of an earlier wreck Thursday morning, where an 18-wheeler overturned near the Flowers exit.

“An 18-wheeler, an SUV, two pickups and an unknown vehicle were stopped when another 18-wheeler collided with the SUV — which was the last vehicle in line — causing a chain reaction collision,” Stewart said.

At 7 p.m., Stewart could only confirm two fatalities, but by 10 p.m., the death toll had grown to three.

The collision caused several fires, including the trailer of the first 18-wheeler, which was carrying cardboard, the SUV and the second 18-wheeler. Stewart said the drivers of the 18-wheelers and the two pickups were able to escape.

Stewart said one eastbound lane of I-20 was reopened as of 6 p.m., while one westbound lane opened around 8 p.m. As of 10 p.m., traffic was still backed up on westbound I-20 past Bolton.

Because of where the accident took place, traffic continued to back up in both directions on the interstate and caused significant delays on feeder roads in the area, including U.S. Highway 80.