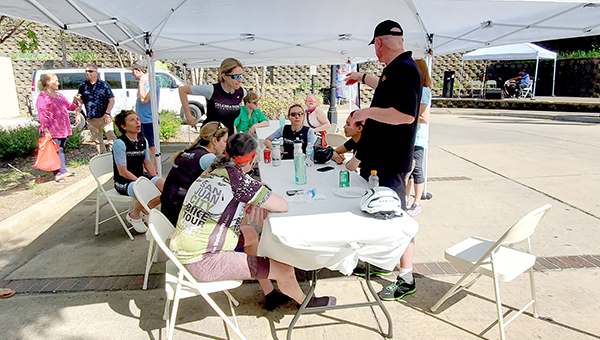 Thomas Walls, event coordinator for the Highway 61 Challenge bike ride, a four-day bike ride from Memphis, Tenn. to New Orleans, La., talks to participants as they rest at River Stage Park after arriving in Vicksburg on the second stage of their ride to raise money for the Children’s Hospital of New Orleans. The group spent the night in Vicksburg and left Saturday for Baton Rouge, La. They will stay there before completing the final leg of the journey to New Orleans. (John Surratt/The Vicksburg Post)

Cyclists stop in Vicksburg on way to New Orleans

A group of cyclists descended on Vicksburg Friday on their quest to finish a 500-mile trek to the Crescent City and raise money for a cause —the Children’s Hospital of New Orleans.

The cyclists were participating in the Highway 61 Challenge bike ride, a four-day trip from Memphis, Tenn., to New Orleans, La.

“We’ve been taking Highway 61 most of the way to Baton Rouge; when we get to Baton Rouge, we’ll take the River Road,” event organizer Thomas Walls said as he stood under a canopy set up by Vicksburg Main Street. A table of food, water and soft drinks for the cyclists was nearby.

Seven riders stopped in Vicksburg Friday to spend the night. By the time the ride finishes in New Orleans, there will be 19, Walls said, adding some riders join the group for certain stages “but it will be 19 when we arrive in New Orleans.”

He said some riders recruited sponsors and others made donations to the hospital,

“This is the first year of the event,” Walls said. “We’ve been working on it for about a year. With the COVID situation last year, we weren’t quite sure we were going to be able to pull it off. We talked to all of our different sponsors and our different hosts and everybody said, ‘If you want it, let’s see if we can make it work; get started.’”

He called the start of the ride Thursday morning “pretty hairy with the weather. It was pouring down raining at 6:45 before we started at 7. At 7’oclock, I don’t know what happened, but somebody was praying for us; the rain lifted and we took off. Yesterday was brutal with the weather but today was beautiful.”

He said the support the riders have had from every county and police and sheriff’s deputies “has been amazing.”

When the ride ends in New Orleans, Walls said, “We’ll have a little finishing party, have a check presentation party with the Children’s Hospital and then these athletes will get on an airplane and fly home.”

One of the more tragic aspects of the COVID-19 pandemic was the number of deaths caused by the virus. According... read more