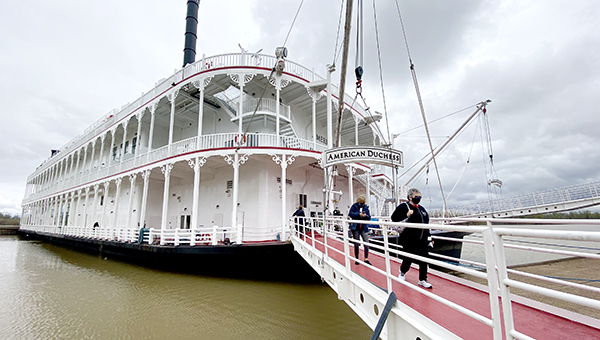 More than a year after it was the last riverboat to visit Vicksburg before the pandemic shuttered the cruise industry, the American Duchess was the first to return to Vicksburg on March 19, 2021. (Tim Reeves/The Vicksburg Post)

The COVID-19 pandemic affected Vicksburg and Warren County in many ways but caused serious harm to one of its key industries.

The area’s tourism industry, which annually attracts thousands of people to the Vicksburg National Military Park and local museums, suffered as fewer people came to the area to visit the park or museums or play in tournaments at Sports Force Parks on the Mississippi.

“The economic impact of the coronavirus pandemic has resulted in a significant hit to the Vicksburg-Warren County tourism industry,” said Laura Beth Strickland executive director for Visit Vicksburg, the county’s tourism organization.

The drop in tourism caused by the virus resulted in almost $4 million lost in taxes and fees and a $43.3 million loss in money spent in the area by tourists for travel, lodging and expenses.

Collections from the 1 percent hospitality tax on food and beverage sales and hotel room rentals to support Visit Vicksburg, Strickland said, generated $1.19 million in fiscal 2020, down 8.62 percent from the $1.30 million collected in 2019.

At one point in June, the Board of Mayor and Aldermen faced a projected $2.2 million deficit in sales tax collections for fiscal 2020.

That was later reduced by state emergency fund reimbursements and sales tax collections for four months toward the end of fiscal 2020 that exceeded 2019. Sales tax revenue at the close of the fiscal year totaled $7.79 million, only .04 percent under the projected $7.8 million and 0.33 percent below 2019.

River cruise boats shut down for the duration of the pandemic and are only now starting to resume visits.

“The biggest hit that I think tourism took from COVID was the loss of the boats,” said Bubba Bolm, curator and director of the Old Court House Museum.

According to Visit Vicksburg, visits to the Old Court House Museum in 2020 were down 76 percent from 2019.

“The boats make up a large portion of the visitors to the museum,” Bolm said. “But we also lost school groups; families just were not traveling. We had to shut down for several weeks due to the COVID, so it was pretty devastating.”

Nancy Bell, executive director of the Vicksburg Foundation for Historic Preservation, said the Biedenharn Coca-Cola Museum, which the foundation owns, took an 80 percent hit from March 1 of 2020 through Feb. 28, 2021.

The museum, Bell said, was closed from March 15 through June 13 under the city’s COVID-19 restrictions.

“Traffic from the cruise boats in 2019 accounted for 40 percent of the paying guests visiting the museum,” she said. “They are truly a blessing for us and keep us in business.”

The annual fundraisers for both museums, which raise the bulk of their revenues, were affected.

The historic foundation’s 2021 Mardi Gras Gumbo Cook-off was canceled, Bell said, costing the foundation $16,000 to $17,000. The spring 2020 Old Court House Museum Flea Market was canceled, but the fall market was held with restrictions.

“We had to socially distance so that probably cut the numbers in half,” Bolm said.

Hotels, which at the time COVID-19 hit were full with workers working at factory outages and shutdowns at Grand Gulf, International Paper and Ergon, were hurt when future reservations were canceled.

“We had all those people already in the hotels and they couldn’t leave, so when COVID hit, we really didn’t feel the tremendous effect until probably the first part of May because these people were already here and could not leave, so we were fortunate in that respect,” said Lynn Foley, executive director of sales and marketing for Southern Hospitality Services, which presently owns three local hotel properties.

“At the beginning of May we began to see the bad at the business level in the hotel and that stuck with us for a while,” she said, pointing out that the Miss Mississippi and Mississippi Outstanding Teen pageants were canceled and weekend business was lost because Sports Force Parks on the Mississippi was closed.

Also, groups that canceled at the convention center had an effect because the hotels were part of the room blocks for conferences and overnight meetings. “The government wasn’t traveling, leisure wasn’t traveling,” Foley said.

“Everything group-wise was canceled,” she said.

Will Spence, National Operations Manager for Sports Force Parks, said the guidelines imposed by state and local government forced the Sports Force Parks on the Mississippi to close during the March, April and into the May season “which in Vicksburg is pretty much the peak season for youth baseball and softball.

“It impacted the size of tournaments where we had teams come from all over the South, from many states away,” he said. “We had more than a double-digit decrease for the year. When the park was reopened in June, we saw business come back but didn’t see the out-of-town teams, we saw people from areas who would drive to the games and then return home.”

He said the local teams and leagues shifted their season back to play, “But people were not traveling distances to come to the park.”

With the lifting of restrictions, Spence said, “We are seeing a lot of out-of-town (teams). The schedule has started with a full event and runs for the next 10 weeks with some great events with new partners from out of town bringing different teams and different sports this weekend.

“Through the fall, we had some really good business and now we’re in our spring season and we’re really pleased with what we’re seeing.”