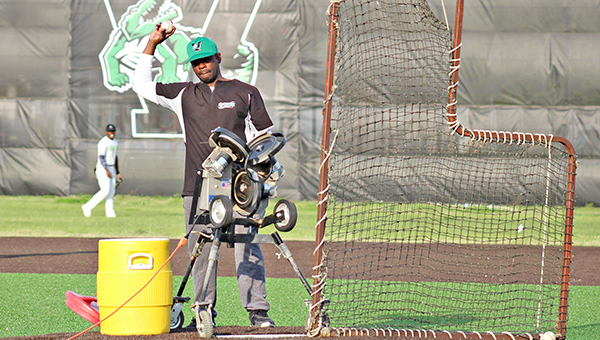 Vicksburg High baseball coach Antonio Calvin feeds a ball into a pitching machine at practice. Calvin was one of more than 300,000 Mississippians who have battled the COVID-19 virus in the past year. (Ernest Bowker/The Vicksburg Post)

St. Aloysius and Warren Central were among the last baseball teams playing in 2020.

Ordinarily, that description would be a good thing. It would mean they were playing deep into the postseason. This time, it meant they were fortunate to squeeze in one last game at a spring break tournament on the Coast before the COVID-19 pandemic sank its teeth into the world.

Warren Central lost 7-1 to Houston on the same day at the Battle on the Coast. Coach Randy Broome remembered it as a day when chaos and uncertainty reigned.

“We didn’t know what was going on, if they were going to come pull us off the field or what,” Broome said. “We had a senior, Shayne Ragan, with a sore hamstring out there and normally you wouldn’t push it. You’d sit him down and not think about it. But we kept him in there because we didn’t want to pull him from what might have been the last baseball game he ever played.”

The two differing outcomes on that day and paths since mirrored many of Mississippi’s high school baseball teams. Some weathered the storm well and remained competitive. Others were crippled by the early shutdown and summer of inactivity that followed as COVID-19 protocols were developed.
Midway through the 2021 season, the effects of 2020 are still being felt.

“It cost a year of progression. Moreso on the mound than anything. A lot of our guys were able to get a bunch of at-bats this summer playing off, but I think it hurt us on the mound,” Naron said. “Some of these younger guys we’re having to trickle them in now and build them up, and I think that’s where it hurt us the most.”

For whatever obstacles Naron’s Flashes have faced, they were among the teams that seem to have fared better following the Summer of COVID — at least until this week. Naron was diagnosed with COVID-19 after a 1-0 loss to Simpson Academy on Monday, which forced the players into quarantine.

Five games against Simpson and Park Place were postponed and must be made up before the MAIS playoffs begin on April 19. Its next scheduled game is on April 6.

St. Al is off to a 12-4 start and is averaging nearly nine runs per game.

St. Al has six starters back from last season, which Naron said helped not only from a talent and experience standpoint, but in terms of attitude as well. The biggest lesson they learned last year, he said, was to not take anything for granted.

“We talked about it to the seniors all the time last year, and we talk about it to this group about making every day count,” Naron said. “We don’t know what tomorrow brings, even now. That’s kind of our motto right now is continue to play every day like it is our last because we saw how that came into reality last year. Best thing we can do now is use that to our advantage.”

A series of setbacks
Across town at Warren Central, the Vikings have not fared nearly as well since returning from the Coast a year ago.

Construction work at their home field cost them the fall practice period in 2019. COVID cut last season short and wiped out the summer developmental period as well. On top of all of that, only two regular players returned from last season’s lineup.

“Prior to COVID, we didn’t get on the field all fall. The field was under work and the MHSAA denied us permission to go somewhere else for our athletic period in the offseason. So we lost our whole offseason before COVID hit,” Broome said. “Then you’re about this time of year and we’re starting to figure things out and COVID hits us. And then nothing really in the summer. We came in for three weeks toward the latter part and could only do rope ladders and conditioning, couldn’t touch a ball or a bat.

“So there are days where I have to remind myself that, in reality, we’re a year and a half behind.”

To make up for lost time, Broome and his coaching staff radically changed their offseason program. Instead of drill work and conditioning, Broome said the team has had live scrimmages nearly every day. The hope was that it would accelerate the learning curve and allow pitchers’ arms to be in shape when the season began in mid-February.

“Our sophomores played one ninth-grade doubleheader last year. So for us, I feel like it was a huge setback,” Broome said. “It forced us to change our deal in the offseason. We did a lot of scrimmages and intersquad just to get game-like reps. We’ve probably scrimmaged more than we ever have. Now, pretty much every day in our practice plan, we’re going to do a little 15-out or 9-out something because we feel like we’ve missed that.”

So far, the Vikings are 3-9 heading into Tuesday’s MHSAA Region 4-6A opener at Clinton and they are averaging less than four runs per game.

Although COVID certainly played a part in pushing back the Vikings’ program, Broome refused to use it as an excuse for the slow start.

“We’re getting to the point in our year now where we need to start getting over that hump,” Broome said. “This team was definitely affected, but when you start getting 40 or 50 at-bats in preseason and intersquad and now the guys in the lineup have about 20 or whatever, it’s the time of year that should be in our taillights. It’s time to adapt and things should be starting to hit.”

Gators fight COVID and Construction
Vicksburg High baseball coach Antonio Calvin has felt firsthand the punch COVID-19 can pack.
The young and fit Calvin was diagnosed with the virus on Dec. 2 and spent two weeks in bed, during which he came face to face with his own mortality.

“It started with my back and my chest. It was the worst back pain that I have ever had in my life. I literally could not get out of bed,” Calvin said. “I was very, very hot and very, very cold at the same exact time. My wife had it too, so we were both laying in bed immobile. We couldn’t even take care of ourselves.”

That, Calvin continued, was just the start of it. The second week of the virus was worse than the first.

“Right about Day 5 or 6 is where it got really, really bad. At that point I had made up my mind that if this was it, this was it, because I didn’t know what else to do,” Calvin continued. “No medicines I took would work or alleviate the pain or night sweats. I made up mind — Lord, I’m saved, I love Jesus, let’s see what happens. But I’m still here. I’m excited about that. That makes me even more hungry to turn this thing around because he allowed me another day to do this.”

“This” is to continue working to turn around Vicksburg High’s baseball program while facing most of the same obstacles as his Warren Central counterpart Broome.

COVID forced Calvin and the Gators to scrap their summer program in 2020. Students returned to school in the fall, but a number of Calvin’s baseball players opted for virtual rather than in-person classes and thus were not on campus for the school’s athletics period late in the day.

The Gators have a respectable 3-5 record heading into their Region 4-5A opener Friday against Callaway, but Calvin feels the team could have been much better at this point with a little more offseason work.

“We’re just now starting to hit the ball. But defensively we’re struggling right now. We’re not the team that we know that we should be, due to some major setbacks with COVID,” Calvin said. “I got sick, a few of my players have gotten sick, with social distancing and everything else we weren’t able to ground and pound like we traditionally are.

“Last year, those guys worked from August all the way up to the season,” he continued. “They were big and strong and fast, and could handle anybody. This team is growing into that, but we missed all of our weight room.”

Adding to the Gators’ woes are lingering problems with their on-campus practice field. Showers Field, as it is known, is being renovated into a permanent home field. Drainage issues and construction delays, however, have left it in a semi-finished state.

New dugouts and bleachers, an artificial turf infield, a new scoreboard and outfield fence show potential from a quick glance. A closer examination, though, reveals construction scraps scattered about, holes in the outfield grass and artificial turf that is not quite sealed down.

Lights were only recently installed. Practicing only during the day, Calvin said, led to problems with tracking fly balls during early-season night games.

No games will be played at Showers Field this season. It takes careful planning to even hold a practice there.

The Gators have been unable to use their longtime home of Bazinsky Field. Once renovations started at Showers Field, St. Aloysius claimed Bazinsky for its own and has first dibs on practice and game times. The artificial turf fields at Sports Force Parks cost $150 per game to rent and are not a viable option for an entire season.

“Not only did COVID hurt us, but construction hurt us. Those guys have been in our locker room for almost two years now,” Calvin said. “We were barely able to get in our outfield. There was a 15-foot deep hole out there that a city pipe ruptured and we were out of commission for almost a month. So we’ve had a lot of major setbacks. We’re not tucking our tail or anything like that. We’re persevering through. We’re 3-5 right now, but we should be at least 7-1.”

Like the other coaches in Warren County, Calvin was quick to say he and his players are not making excuses or dodging any problems they’re encountering. All they can do, he said, was work through them like they would any other problem.

“Those things are out of our control. There is nothing we can really, truly do except find ways to work around it,” Calvin said. “I’m really proud of them. These guys have worked really hard and they did everything we’ve asked them to do. And everything we’ve been able to work on, they’ve worked on. But we do have our limitations.”