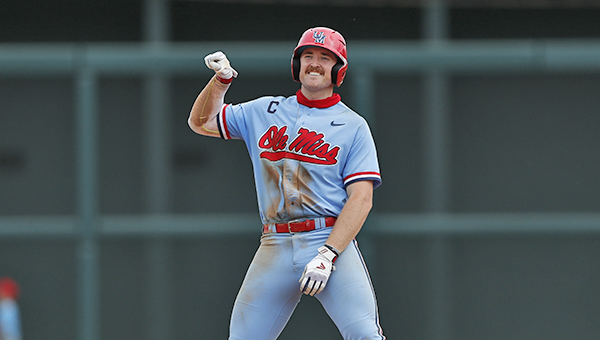 Ole Miss’ Tim Elko celebrates on second base after hitting a double Saturday against Alabama. Elko went 4-for-5 with five RBIs to lead the Rebels to an 11-6 victory and a series sweep. (David Gray/UA Athletics)

TUSCALOOSA, Ala. — No. 3 Ole Miss improved to 6-0 to start Southeastern Conference play for the first time since 1969 with an 11-6 win over No. 23 Alabama on Saturday.

Tim Elko continued his outstanding season, going 4-for-5 with a double, home run and five RBIs for the Rebels (20-4, 6-0 SEC). Elko hit a three-run double in the fifth inning and scored on a wild pitch to give Ole Miss a 4-1 lead and it never trailed again.

On the mound, starter Derek Diamond turned in a solid outing. He pitched six innings, allowed three runs on six hits and three walks, and finished with six strikeouts. He retired seven straight batters after giving up a run in the second inning.

Austin Miller, Wes Burton and Josh Mallitz combined to close it out, allowing three runs on four hits and no walks over three innings of work.

Ole Miss returns to action Tuesday at 4 p.m., at home against North Alabama.

Mississippi State (17-6, 2-3 SEC) pushed out to a 3-0 lead in the first inning, and the two teams exchanged runs in the third, before Arkansas (18-3, 4-1) scored nine runs between the fifth and seventh innings to grab control.

Arkansas hit four home runs, all in the fifth and sixth innings. Brayden Webb and Cullen Smith hit solo shots, Christian Franklin hit a three-run homer in the fifth inning and Matt Goodheart capped the barrage with a two-run shot in the sixth that put the Razorbacks ahead 8-5.

Mississippi State and Arkansas will finish their three-game series Sunday at 2 p.m.

All of the home runs came in the first four innings to stake the Golden Eagles to a 7-2 lead, and they scored five more runs in the fifth inning to blow the game open. Christopher Sargent hit a bases-clearing double to key the fifth-inning rally.

In the second game of the doubleheader, Cade Gibson threw a three-hit shutout to lead Louisiana Tech to a 4-0 victory and the series win as well.

Gibson struck out six batters, walked one and hit one in his seven-inning complete game.

Steele Netterville went 2-for-3 with a home run and three RBIs for Louisiana Tech (16-6, 2-1). He hit an RBI single in the third inning and a two-run home run in the fifth.