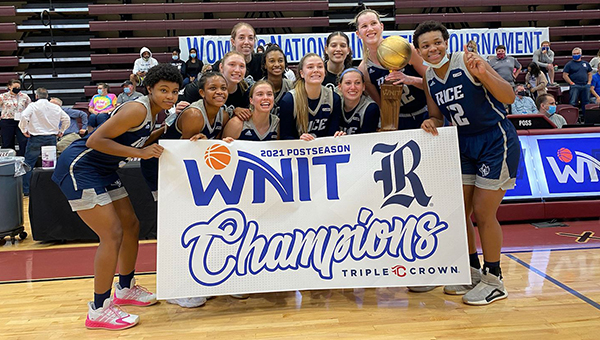 Rice players celebrate after beating Ole Miss 71-58 in the WNIT championship game on Sunday. (Courtesy of the WNIT)

COLLIERVILLE, Tenn. — Ole Miss gave all it had left to cut what was once a 16-point second half deficit to four, but a superb and clinical Rice team never faltered and knocked off the Rebels 71-58 in the WNIT championship game on Sunday.

Rice (23-4) became the 23rd different WNIT champion since the tournament started in 1998, and the first from Conference USA.

It shot 50 percent from the field in the championship game, went 17-for-17 from the free throw line, and got big games from Lauren Schwartz (19 points, five assists) and Nancy Mulkey (19 points, 12 rebounds, seven blocks).

Ole Miss (15-12) finished with its first winning season since 2016-17. It reached the championship game of a major postseason tournament for the first time in the program’s history, just one year after going 0-16 in the Southeastern Conference.

“Of course, we wanted to win, but in hindsight if we couldn’t win then I still feel like I got a victory for this program out of this,” said Ole Miss head coach Yolett McPhee-McCuin, who missed the first three WNIT games because of a COVID-19 diagnosis. “I know that may sound cheesy to some people. I could list the wins that we got from this experience and this season. Obviously my team is heartbroken, but I talked to them about good things that they did, and I am very appreciative of them.”

Rice was poised from the jump, causing mayhem in transition and negating what had been a lethal Ole Miss defense. The Owls held the Rebels to a meager 21.2 percent shooting clip in the first half en route to 34-23 halftime lead.

Rice extended its lead to 16 points by the 8:22 mark of the third quarter and led 52-40 heading into the fourth, but with 10 minutes left in their season the Rebels roared back to life.

Ole Miss ripped off a 10-0 run thanks to a ferocious defensive effort, which included three turnovers and a blocked shot. The Rebels scored 23 points off of Rice’s 24 turnovers in the game, but Rice’s inability to miss from the free throw line and the powerful one-two punch of Mulkey and Schwartz proved too much in the end.

“I was telling the team that two years ago, Rice was in the NCAA Tournament. Those same kids played in the tournament,” McPhee-McCuin said. “They understood the moment, you could tell from the beginning of the game. They understood it and my players didn’t.”

Ole Miss star junior forward Shakira Austin had her hands full with the 6-foot-9 Mulkey, but held her own, scoring 25 points, hauling in nine rebounds and tying a season-high with five blocks.

“Shakira is special. We have one more year with her, so we definitely have to make it work for us,” McPhee-McCuin said. “She’s going to go in the (WNBA) draft, hopefully top-three next year. There are somethings we’re going to do to improve her game. I just told her I appreciate her.”