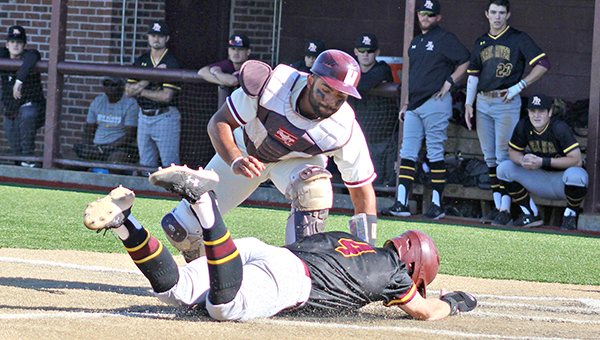 Hinds Community College catcher Pablo Lanzarote tags out Pearl River Community College runner Matt Mercer (4) on an attempted steal of home during game one of a doubleheader Monday in Raymond. Pearl River, ranked No. 2 in the country, swept No. 20 Hinds 13-4 and 13-1. (Ernest Bowker/The Vicksburg Post)

RAYMOND — Just when it looked like it was moving into the fast lane, Hinds Community College’s baseball team has hit another speed bump.

Nick Skaggs hit two of Pearl River Community College’s five home runs, and the second-ranked Wildcats swept a doubleheader from No. 20 Hinds on Monday, winning 13-4 and 13-1.

Hinds (12-12, 10-8 MACCC) had won four in a row and eight of nine games, but has now scored a total of six runs during a three-game losing streak that dropped its record back to .500. The Eagles play a doubleheader Friday at Copiah-Lincoln Community College.

Pablo Lanzarote hit a two-run home run to give Hinds a 2-1 lead in the third inning of game one against Pearl River, but things turned sour for the Eagles after that.

Two errors led to three runs, including one that came across on a double by Skaggs, and Pearl River (23-5, 13-3) never trailed after taking a 4-2 lead. It scored in each of the last five innings.

Hinds committed six errors in the game that led to 11 unearned runs.

Cummins walked three times in game two. He reached base in every at-bat of the doubleheader.

“It was a pretty fun day, to say the least,” Cummins said. “It’s been a while since I’ve had one of those days, so to come out here and swing it well, it was pretty good.”

Former Warren Central star Sean Daily went 2-for-3 with a double and a run scored for Hinds, and Justin Williams also had two hits and scored one run.

Former Vicksburg High star Kendrick Bershell pitched one inning of relief for Hinds, and allowed two runs, one earned, on one hit. He had one strikeout.

Game two of the doubleheader followed the same pattern as the first. Hinds committed five errors that led to seven unearned runs, Skaggs and D.K. Donaldson homered, and Pearl River cruised to a 13-1 victory.

Parker went 3-for-4 with two RBIs and two runs scored for Pearl River, Donaldson scored three runs, and Austin Izzio was 3-for-4 with three RBIs.

Skaggs’ two-run homer was part of a five-run rally for the Wildcats in the second inning. Izzio hit an RBI double in the second as the stretched their lead to 7-0, and Hinds never got back in the game.

Hinds’ only run scored on an RBI single by Connor Carter in the third inning. Matt Corder scored on the hit, and also finished 2-for-2 with a double.