River to crest Wednesday and fall, but remain above flood stage 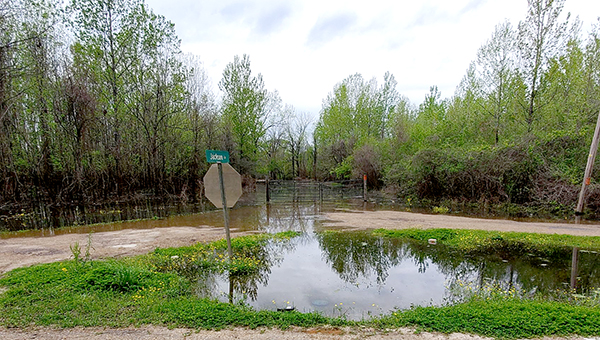 Water from the Mississippi River is seen already creeping over portions of roads at the intersection of Pittman Road and Jackson Lane. (John Surratt/The Vicksburg Post)

The Mississippi River is expected to crest at Vicksburg at 45.5 feet on Wednesday and begin a slow fall, but it will remain above flood stage until after April 12, a hydrologist for the National Weather Service Office in Jackson said.

The Mississippi at Vicksburg was at 44.5 feet Tuesday. At 44 feet, Ford Subdivision and the Kings community at Pittman Road and Mary’s Alley begin to flood. At 44.6 feet, homes on Williams Street begin to flood and at 45.2 feet the Vicksburg floodwall gate at South Street is closed.

At 46 feet, the water level begins to reach the grain bins at the Bunge Grain facility.

Hydrologist Marty Pope said heavy weekend rains in Kentucky and Tennessee caused forecasters to raise the crest at Cairo from 44.5 to 46.5, and increased the crest forecasts as far as Helena, Ark., “but they’re not going to push it (the rise) out any farther. It may slow it down but we’re not going to see a turn unless we get a lot of rainfall in the Arkansas Basin.

“Everything I see right now based on future rainfall we could get from Arkansas City (Ark.) across to northern parts of Mississippi. It could be two inches or less. That shouldn’t be too awfully significant; it may just fill in even more and flatten out the river.”

Pope cautioned the information did not include the 16-day precipitation forecast, which may affect the current predictions.

The Mississippi at Vicksburg will remain at 45.5 feet through Thursday before falling, Pope said, and dropping to 45.4 by Friday. The river is expected to drop four-tenths of a foot per day, slow down April 7, and then drop about one-tenth of a foot per day.

“It’s going to slow down its recession and stay above flood stage to April 14,” Pope said. “If we get any rain, that could push it (extend the drop) out further.”