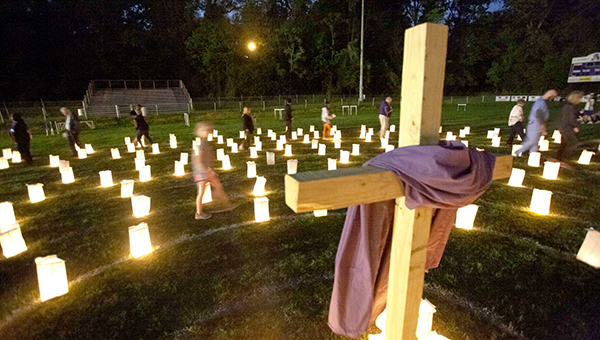 The event was set for Wednesday night but teacher Joan Thornton, who works with the seniors on the event, said the rain that passed through the area Wednesday morning raised concerns about placing the luminaries on Balzli Field.

“The field is soaking wet and we were afraid that even if the weather went through that the water would seep through the bags and they won’t stay lit,” Thornton said.

Holding the luminaries on April 7, after Easter, she said, will give people the opportunity to walk the labyrinth “in joyful celebration and thanksgiving of the resurrected Christ.”

Prayer labyrinths have existed in one form or another as far back as 3,500 years ago. In the Middle Ages, the Catholic Church put them in cathedrals to symbolize the path to God or ascension to salvation and enlightenment. Some labyrinths served as a pilgrimage to Jerusalem for people unable to make the actual journey.

People start on outside of the labyrinth and begin with a prayer to the Holy Spirit to be with them and guide them.

As people get closer to the center, Thornton said, the luminaries are blank to give people an opportunity to understand “that it’s me and God. As we get to the center, we recognize it’s about me and my faith and our relationship with God, so we have our blank bags toward the center, where they are lit and have no writing on them.”

St. Aloysius’ senior classes have been doing the labyrinth since 2014, usually in the spring, but Thornton said the idea for the luminaries service began several years before.

“The class of 2010 is the first class that did one, and we did it to raise money for our senior retreat,” she said.

Thornton said she first used luminaries when she was youth minister at St. Michael Catholic Church, and she brought the idea to St. Aloysius.

“I was trying to teach children the significance of All Souls Day and we would do a luminary for our service at St. Michael’s for All Souls Day to help the kids understand what that feast day is all about,” she said.

The labyrinth was developed after St. Aloysius changed its fundraising policy to allow only two fundraisers a year.

“This (the luminaries) was an important one,” she said, adding she was teaching the labyrinth-style prayer to the seniors, who expressed an interest in making a labyrinth and that carried over to the luminaries service.