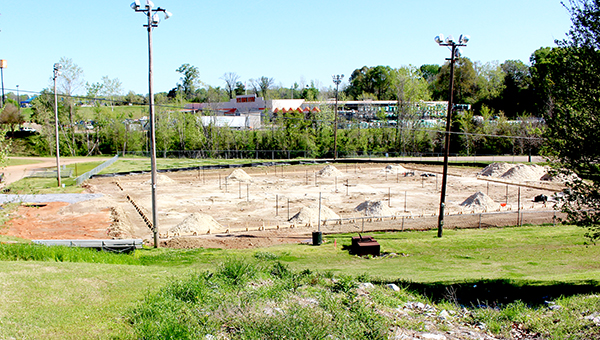 Vicksburg’s pickleball courts at Halls Ferry Park and the construction of a new access road to the park are both on schedule, South Ward Alderman Alex Monsour said.

“The contractors are out there; we had a 60-day construction contract on it (the courts) and they’re on time,” Monsour, who is over city recreation, said Thursday. “As of yesterday or the day before, they were getting ready to pour the concrete. According to them, they’re on schedule and we’ve got all the material. We’re looking forward to getting it finished.”

The Board of Mayor and Aldermen in late January authorized Flaggs to execute the city’s contract with Quality Court Industries of Baton Rouge, La., to build the courts.

Quality Court bid $253,676, which was the lowest of four bids submitted for the project. Quality Court began work in mid-February.

The project was rebid after the initial bids came in over the $278,000 project budget. The project was redesigned to help reduce its cost and Monsour said some of the concrete work at the site was done in-house, cutting another estimated $30,000 from the project’s cost.

“That brought the project back under budget,” he said.

Pickleball is a game played with a paddle and a plastic ball with holes that employs the elements of tennis, Ping-Pong and badminton. It is played both indoors or outdoors on a badminton-sized court and with a slightly modified tennis net.

The sport has become popular with many residents who play at several local gymnasiums and on the Halls Ferry tennis courts, where the pickleball courts are lined off using tape.

But the tape was damaging the tennis courts and threatening the potential to host the U.S. Tennis Association-sanctioned tennis tournaments at the tennis complex, Monsour said in September.

City officials initially planned to build the pickleball courts adjacent to the tennis complex, but problems with the proposed site forced the courts’ relocation to the ladies’ softball field at Halls Ferry.

The same day it approved the contract with Quality Court, the board awarded the bid for the Halls Ferry Road extension to Theobald Construction of Vicksburg, which was the low bidder on the project with $185,125.

“They are working on it as we speak,” Pubic Works Director Garnet Van Norman said of the road project. “I don’t expect it to be much longer.”

He said the city recently had to relocate a fire hydrant, but that was done with little problem.

The road project involves extending a dead-end road that intersects Halls Ferry Road and runs between Chick-fil-A on the road’s north side and Starbucks to the park. City officials acquired the right of way to extend the road, which is south of the Halls Ferry/Pemberton Square Boulevard intersection. The road has been dug to Halls Ferry Park Road.

Under the agreement with the city, Allen & Hoshall Engineers of Jackson, which designed the asphalt road to the park, also enlarged the entrance to nearby Fire Station No. 8.