Lady Vikes freshman Hall racks up goals, is Player of the Year 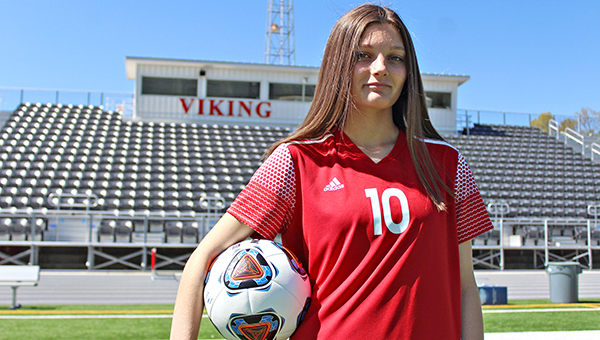 Last season, when she was an eighth-grader trying to find her footing with Warren Central’s varsity soccer team, Gloria Hall admits it was an intimidating experience.

“I played varsity in seventh and eighth grade, and of course I was nervous. I mean, playing with seniors and I was just the little freshman on the team,” Hall said.

Fast forward a year, and Hall was a very big freshman.

The striker scored 20 goals in her ninth-grade season and stepped into a leadership role on a team that had no returning starters. It added up to a remarkable season that netted her The Vicksburg Post’s girls soccer Player of the Year award.

“I’m obviously very grateful. My coaches are amazing. My team is amazing. I couldn’t have done this, at all, without my teammates. Getting the ball from defense, to midfield, up to me and working it around is a big part of the sport,” Hall said. “I’m just a freshman, and to be the all-county Player of the Year is just amazing to me.”

Although she is only a freshman, Hall is also one of the most experienced players on the Lady Vikes’ roster. She’s one of the few that has played select soccer since a young age, and with her little bit of varsity experience was a natural fit as the go-to player for the new-look Lady Vikes.

“Gloria has always had skill out there. Even as a seventh- and eighth-grader she probably could have started for me. But I think she was so scared to play with these older girls that she made the varsity team, but whenever I put her in there it was like she was scared to get in there,” Warren Central coach Greg Head said. “When we lost all 11 starters from last year’s team, I knew we were going to have to rely on her, ninth-grade or not.”

Hall said she knew the situation both she and the team were going to be in this season, and embraced the challenge.

“I knew coming into it that there were not a lot of players, and there were a lot of learners who were getting used to the game itself,” Hall said. “I had to step up as a leader and even help some of the older girls that tried out this year. I have a lot of history with soccer.”

Hall was not just the most experienced player for Warren Central, but also its most talented scorer. She scored two goals in the 2019-20 season and then became the focal point of the offense in 2020-21.

She led the team in scoring and helped the Lady Vikes finish with a respectable 9-9-1 record.

They did not make the playoffs — only two teams from each region go, and Warren Central was stuck in the same league as Class 6A semifinalists Clinton and Madison Central — but did turn what could have been a very difficult rebuilding year into one that provided optimism for the future.

“As a ninth-grader, you put all that weight on a little girl’s shoulders and some would buckle. But she did well,” Head said. “She didn’t quit, she kept on, and she did well. That’s great for the years to come.”