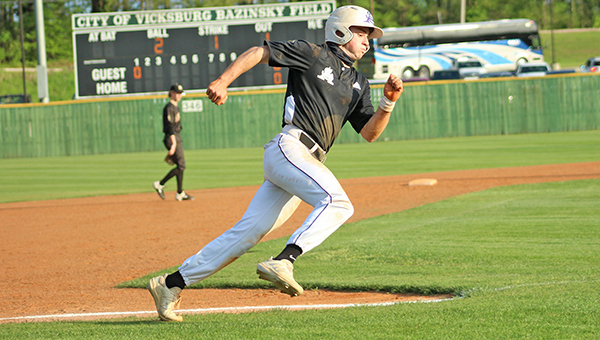 St. Aloysius' Wes Warnock rounds third on his way to scoring a run in the first inning Tuesday against Hartfield Academy. It was the Flashes' only run in a 10-1 loss. (Ernest Bowker/The Vicksburg Post)

Collin Stringer drove in three runs, Bran Boyd went 3-for-5 with two runs scored, and Hartfield scored 10 unanswered runs to beat St. Al 10-1 in the opener of a three-game MAIS District 3-4A series at Bazinsky Field.

Wes Warnock led off the game with a single for St. Al and scored on an error for a 1-0 lead in the bottom of the first inning. That was it for the Flashes’ offense, though. Hartfield pitcher Lincoln Sheffield struck out 10 batters and did not allow another hit in a complete-game victory.

Hartfield’s hitters, meanwhile, backed him with three runs in the second inning, three more in the third, and two in the fourth to provide plenty of support.

St. Al was quarantined for two weeks after coach Sid Naron was diagnosed with COVID-19, and played its first game since March 22. Naron has recovered and was back in the dugout for Tuesday’s game.

The Flashes will now play nine games in 11 days to make up for those postponed during their quarantine period. They will play a doubleheader Friday at 4 p.m. at Hartfield, and six district games next week against Central Hinds and Park Place.

Winn allowed three hits and one unearned run, did not walk a batter and struck out seven.
Richard Mayes was 2-for-2 with a triple, one RBI and three runs scored for Ridgeland (9-8, 3-0 MHSAA Region 4-5A).

Tyler Carter drove in Vicksburg’s only run with a ground out in the first inning. Ridgeland answered with four runs in the bottom half, tacked on two more in the second, and then six in the fifth inning to finish the game via the mercy rule.

PCA rallied from a 4-0 deficit after one inning and took a 6-5 lead on a two-run single by Jace Riggs in the top of the seventh. Greenville-St. Joe tied it with an RBI single by Jordan Jennings in the bottom of the seventh, however, and eventually won it in the ninth.

Taylor Osborne finished 2-for-4 with three runs scored for PCA, and Gage Palmer drove in three runs. Palmer also pitched 5 1/3 innings of relief and had 11 strikeouts.