Warren Central gives No. 1 Jags a fight in defeat 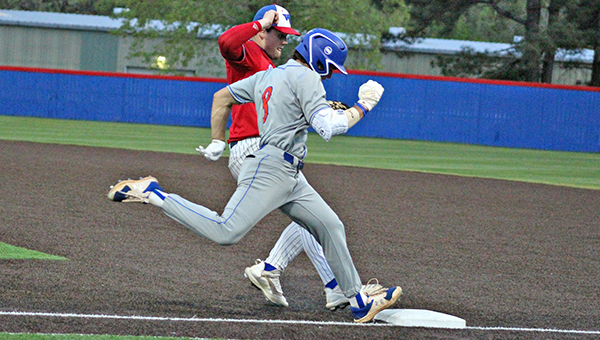 Warren Central did not shock Mississippi’s high school baseball world on Tuesday night, although it did give it a good try.

Braden Montgomery struck out 16 batters and did not allow a hit in six innings, and Hunter Hines hit a three-run home run to lead Madison Central to a 6-0 win over Warren Central.

It was only the sixth time in 19 games this season that Madison Central (19-0, 4-0 MHSAA Region 4-6A) — the No. 1 ranked team in the country by MaxPreps.com — has been held under 10 runs. It also tied for its second-lowest run total of the season.

“I think it was the chance to play No. 1 in the country. You don’t get these opportunities very often. They’re (Madison Central) a special group, no doubt. You want to make some memories,” Warren Central coach Randy Broome said.

Warren Central (4-13, 1-3) only put one ball in play against Montgomery — a ground ball to short by Mayson Shealy leading off the third inning. The right-hander with the 95 mph fastball did, however, hit two batters and walk two more, which gave Warren Central some hope late in the game.

A two-out walk, a hit batter and a wild pitch in the sixth inning put runners at second and third before Montgomery ended the threat with his 16th and final strikeout of the game.

Reliever Connor Nation worked around a single by Cooper Orman — the Vikings’ only hit of the game — to finish it in the seventh.

“It’s kind of fun when you hear the hype. You hear this guy throws this, or this guy throws that and you always think it’s elevated, and then he steps up on the bump and he’s rearing back and throwing the fireballs at you,” Broome said of Montgomery. “I thought we had some competing at-bats. I thought we had some quality at-bats. We had some guys foul some balls off, hang in there and extend it, and we were able to see a reliever. It’s little W’s, and that’s one of them.”

Although their batters barely touched the ball, the Vikings hardly rolled over.

Hines’ home run staked the Jaguars to a 3-0 lead in the top of the first, they got one more run in the third, and then didn’t score again until plating two on RBI singles by Ross Highfill and Montgomery in the sixth to finally gain some real breathing room.

Shealy, Warren Central’s starting pitcher, allowed seven hits and four walks in five innings, but only one run after Hines’ homer. Charlie Appleton replaced him in the sixth and gave up two runs, but also retired the side in order in the seventh.

Their performance, as well as that of the defense behind them — the Vikings only had one error — provided plenty of optimism heading into two more games with the Jaguars later this week.

Warren Central goes to Madison Central Friday at 7 p.m., and then the teams are back at Viking Field Saturday at 1 p.m.

“Four or five years ago Desoto Central shows up with (current Atlanta Braves player) Austin Riley and I’ll be danged if we don’t go up there and beat them in a game,” Broome said. “I’ve seen it happen. Our ‘01 (state championship) team lost three games. So why couldn’t we be the ones to put an L on them? Sooner or later somebody’s got to beat them. It’s almost impossible to go undefeated in baseball, so why not us?”