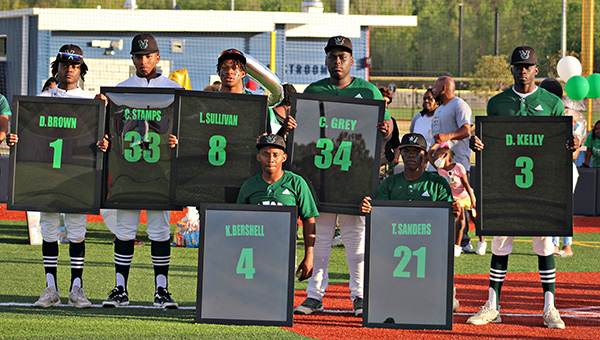 Vicksburg High is, generally speaking, a pretty young baseball team. Only a few of its regular starters are among the seven seniors on the roster. For one night, though, they all got to play and have their moment in the spotlight.

Kentrez Bershell tripled twice and drove in three runs, his fellow senior Cameron Stamps hit a two-run triple and scored a run, and the Gators rolled to a 13-1 victory over Callaway on senior night on Thursday.

All seven of the team’s seniors started, and each of them either scored a run or had an RBI.

Bershell’s RBI triple in the first inning put Vicksburg ahead 2-1 after it had spotted Callaway (0-5, 0-3 MHSAA Region 4-5A) a run in the top of the frame. Stamps hit a two-run triple off the left field fence in the second inning to make it 5-1, and from there the Gators didn’t do — and didn’t have to do — too much at the plate.

Callaway pitchers Tre Davis and Wesley Corbitt combined to walk 14 batters. Half of those came in the fifth inning, when the Gators scored seven runs to finish the game via the mercy rule. The only two balls they put in play in the inning were a sacrifice RBI bunt by Datreion Kelly and a grounder by Bershell that was booted for an error, allowing two runs to score.

“We were happy about that part,” Calvin said, referring to the number of walks the Gators took. “Sometimes when you see pitchers like that you get over anxious and you try to do things you’re not taught to do. I was happy our guys sat there and patiently waited. They took what the pitcher gave them, for the most part.”

Calvin plans to return to his usual lineup loaded with underclassmen on Friday, when the Gators (7-7, 3-1) host Ridgeland at 3 p.m. at Sports Force Parks in another region matchup. He did say, however, that the seniors’ contributions could last more than one night.

Callaway’s pitchers threw 20-25 mph slower than what the Gators can expect to see against Ridgeland. By keeping some of his starters on the bench, Calvin was hopeful it kept them from getting into bad habits as they try to adjust from one extreme to the other.

“These guys are going to throw 80-plus tomorrow. That’s a huge swing. So for us, that’s tough, but we’re going to get back to what we do,” Calvin said. “You don’t have to worry about their swings being out of whack. A lot of our regular guys were on the bench. You’re going to see a difference in those (other) guys tomorrow.”

For the first time in 20 years, Warren Central will not be part of the MHSAA fast-pitch softball playoffs. Makenzie... read more