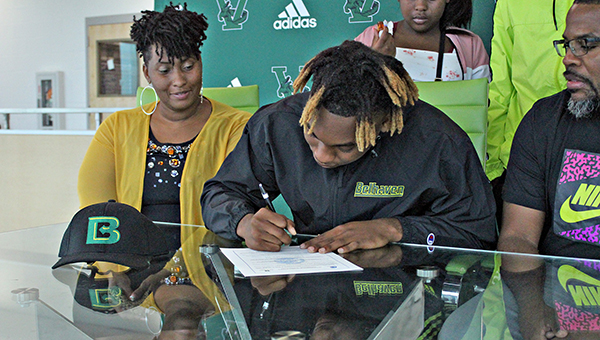 Tommy Cutis III grew up hearing stories of his father’s football prowess at Vicksburg High and Hinds Community College. As it turns out, he’s making a bit of a name for himself and creating some legends of his own.

Curtis, a senior linebacker at Vicksburg, signed to play at Belhaven University on Friday. Belhaven is an NCAA Division III program that does not offer athletic scholarships, but Curtis will receive academic scholarships. He has a 3.8 GPA and scored a 19 on the ACT.

“It feels amazing. It’s a day I’ve been waiting on for a long time. I finally got my day and it feels real good to put that pen to the paper. It feels like everything just came all together,” Curtis said.

Curtis led Warren County with 103 tackles in 2020, including 18 for loss, and was an All-Region 2-5A selection. He’s also a physical specimen who runs a 4.5-second 40-yard dash at a playing weight of 240 pounds and hits like a truck. He has slimmed down to 215 pounds since the season ended, and his coach at Vicksburg Todd McDaniel believes Belhaven found a diamond in the rough.

“As soon as Tommy steps in the room he’s going to be the leader of the defense at Belhaven, bar none. His work ethic is second to none. And he’s a physical kid, smart and instinctive. Tommy plays the game in his head all the time before the ball is even snapped,” McDaniel said. “I just can’t wait to see him get out on that field, grow and mature. His opponent’s going to wonder, ‘How did this kid get here?’ For Tommy, the sky’s the limit.”

Curtis’ path to Belhaven was almost accidental. He was being recruited by a number of Mississippi’s junior colleges, but wasn’t on Belhaven’s radar initially. The Jackson school was, however, recruiting his teammate Michael Montgomery.

Montgomery wound up signing with Pearl River Community College, but suggested that Belhaven’s coaches take a look at Curtis. They did, and immediately liked what they saw.

“I told him to stay the course. Everybody’s journey is different, and his opportunity came. I told him to just continue to trust the process and allow God to send him where He wants to send you,” Curtis’ father, Tommy Curtis Jr., said.

For his part, Tommy Curtis III said he liked both the opportunity to play at a four-year college and the religious atmosphere at Belhaven.

Now Curtis will turn his attention toward helping Belhaven when it plays its second season of 2021 in the fall. The Blazers finished 3-2 in a limited spring schedule, with wins in their last three games.

“I feel like I’ll be able to walk in and make a big impact on the team, because I know I’m a hard worker and what I can do,” Curtis III said.

His father, who played quarterback and set Warren County’s single-season passing record at Vicksburg in 1995 — it has since been broken — and went on to play at Hinds Community College, backed his son up on that point.

“The way he feels now, the energy, the motivation, the dedication to his workouts, he’s going to be exciting on the next level,” Tommy Curtis Jr. said. “I feel like he’s a hidden gem and a sleeper. Belhaven’s got something coming.”

Vicksburg High is, generally speaking, a pretty young baseball team. Only a few of its regular starters are among the... read more