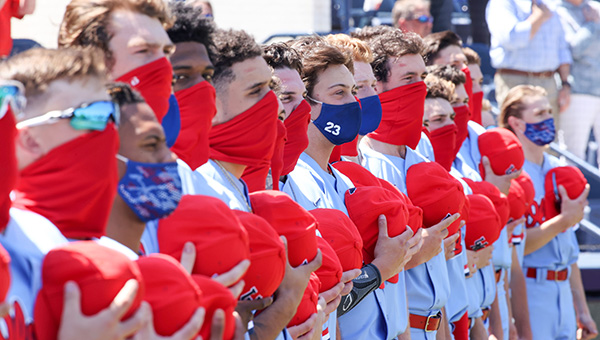 Ole Miss baseball players hold their hats over their hearts during the national anthem prior to Sunday’s series finale against Arkansas. (Joshua McCoy/Ole Miss Athletics)

Ole Miss roared all the way back from an 11-run deficit Sunday, but wasn’t able to seal the deal with a victory.

Brady Slavens hit tiebreaking two-run double in the eighth inning and scored on a base hit by Christian Franklin to put Arkansas ahead to stay, and the Razorbacks added an insurance run in the ninth to beat Ole Miss 18-14 on Sunday.

Arkansas’ late rally came after it squandered a 14-6 lead in the middle innings.

Peyton Chatagnier hit a bases-clearing double and Kevin Graham followed with a two-run home run for Ole Miss in the bottom of the sixth inning. In the seventh they scored three more runs, the last on a fielder’s choice off the bat of Calvin Harris.

Arkansas (26-5, 9-3, 9-3 Southeastern Conference) then rallied in the eighth and ninth innings to steal back the win, as well as a series victory in a matchup of SEC West powers.

Cayden Wallace, Cullen Smith and Braydon Webb all homered for Arkansas, which jumped out to an 11-0 lead in the top of the third inning. Ole Miss scored five times in the bottom of the third and once in the fifth to set up its middle-inning comeback to tie it.

Graham and Justin Bench homered for the Rebels (24-8, 8-4), while Chatagnier was 3-for-6 with four RBIs and three runs scored.

Logan Tanner went 3-for-5 with a home run, five RBIs and three runs scored for Mississippi State. His three-run homer in the eighth inning put the Bulldogs ahead 19-5.
Allen finished with two hits and scored two runs, and Kamren James went 3-for-4 with one RBI and four runs scored.

Since getting swept at home by Arkansas two weeks ago, Mississippi State has won seven consecutive games overall and swept both of its SEC series in that span. It will host Arkansas State on Tuesday and then Ole Miss in a three-game series next weekend.

“We have some very talented players, some very experienced players, but more importantly, we have a tough group of players,” Mississippi State coach Chris Lemonis said. “Arkansas was a tough weekend, but the guys put it behind them and went to work. Each of the past six or eight games we have played, I feel like we are a little better in each one.”

Southern Miss, which never trailed in the series, earned its second straight sweep of a conference opponent. It has won seven consecutive games.

Sargent finished 2-for-4 with a triple, home run, four RBIs and three runs scored for the Golden Eagles. Fischer had two hits and scoredd three runs, while Ewing, Danny Lynch and Will McGillis all drove in two runs apiece.

Boyd (2-2) allowed three runs, one earned, in six innings on the mound. He struck out five, walked, none, and scattered six hits.

Ryan Och pitched the last 1 2/3 innings for his first save of the season.