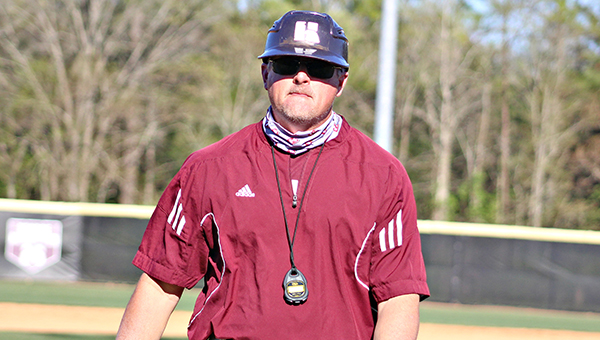 Hinds Community College baseball coach Sam Temple walks back to the dugout between innings of a game against Pearl River earlier this season. Temple was hired Monday as the next head coach at Clinton High School. (Ernest Bowker/The Vicksburg Post)

Temple has been hired as the next baseball coach at Clinton High School, the Clinton Public School District announced Tuesday. Temple’s hire was approved by the CPSD at its meeting on Monday.

Temple will finish the 2021 season at Hinds and take over as Clinton’s coach this summer.
Hinds was scheduled to play a doubleheader at Jones College on Tuesday afternoon and Temple was not available for comment. In a release from the CPSD announcing the hire, however, Temple said he was happy to take over Clinton’s baseball program.

Temple previously served as Clinton’s head coach for one season in 2002.

“I couldn’t be happier,” Temple said in the release. “I’ve always believed in serving and working where your feet are, and mine are in the Clinton community. Every member of my family is involved in the Clinton Public School District, and now that includes me.”

Temple is a Vicksburg native who graduated from Porter’s Chapel Academy. He was Warren Central’s head coach from 1996-2001, and led the Vikings to the MHSAA Class 5A championship in 2001.

Temple then coached one season at Clinton High School in 2002 before taking a job as an assistant at Mississippi College. He coached there until 2005, when he was hired at Hinds.

He entered the 2021 season with 421 victories. Hinds has a 14-12 record this season heading into Tuesday’s games at Jones.

Since 2006, a total of 148 Hinds players have signed with four-year colleges, 86 have gone on to play at NCAA Division I schools, and six have been selected in the Major League Baseball draft. Three members of this year’s team — pitcher Matt Corder (Mississippi State), catcher Pablo Lanzarote (Purdue) and infielder Connor Carter (Charleston Southern) — have signed with Division I programs.

Now he’ll try to build up a Clinton baseball program that is just 9-11 this season.

“We’ll be putting in a lot of hard work,” Temple said. “I’ve always believed in that. Hard work is the key word, both on and off the field. My goal is always to develop good baseball talent but also to build good young men of character.”