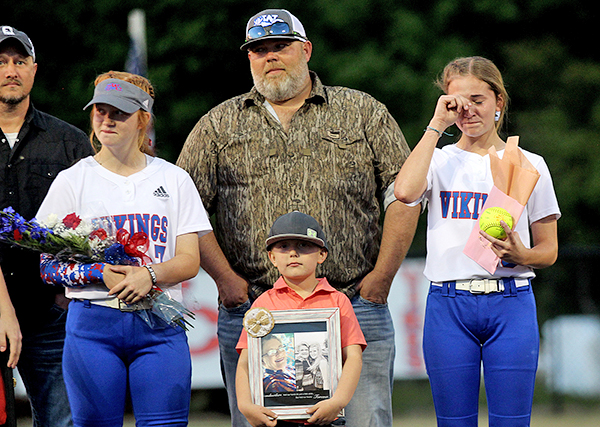 Warren Central scored multiple runs in every inning except the fourth, and needed every bit of its highest-scoring performance of the season to hold off Pearl.

Seniors Mason Smith and Kayleigh Beard both had big games on senior night. Smith doubled, drove in four runs and scored two, while Beard went 3-for-4 with three RBIs, and the Lady Vikes beat Pearl 18-12.

After Pearl jumped out to a 2-0 lead in the top of the first inning, Warren Central took control by scoring six runs in the bottom of the inning, two more in the second, and three in the third. Smith hit an RBI double, while Beard had RBI singles in both the first and second innings.

Pearl also scored in each of the first four innings to get as close as 11-7, but never led after the first inning. Franny Clark went 2-for-4 and scored five runs for Pearl (8-9), Kimora Bailey went 3-for-5 and scored three runs, and Jalin Coleman was 3-for-4 with two RBIs.

Vicksburg 16, Ridgeland 2
In a little more than 24 hours, the Vicksburg Missy Gators moved into the driver’s seat in the MHSAA Region 4-5A fast-pitch softball championship race.

It was their second run-rule victory over a region opponent in as many days, following a 24-0 rout of Canton on Monday. Vicksburg was already guaranteed a playoff berth — there are only three teams in Region 4-5A, and three teams from each region qualify — but can clinch a first-round bye in the Class 5A bracket by beating the Titans at home next Tuesday.

Vicksburg (8-10, 3-0 Region 4-5A) can also clinch the region title even if it loses to Ridgeland, provided Ridgeland doesn’t win the rematch by 10 runs or more. The MHSAA softball playoffs begin April 23.

Vicksburg made short work of Ridgeland by scoring 10 runs in the top of the first inning and finishing it in four innings via the mercy rule. Ridgeland’s pitchers walked 14 batters and hit three more, and the Missy Gators only had five hits.

Three of Vicksburg’s hits came in the big first inning. McAdam led off with a single, Trinity McGloster hit an RBI double, and Lockridge drove in two runs with a triple. Four walks and three hit batters were mixed along with the hits to keep the bases full.