Grand Gulf VP: ‘There’s a lot of pride in what we’re doing’ 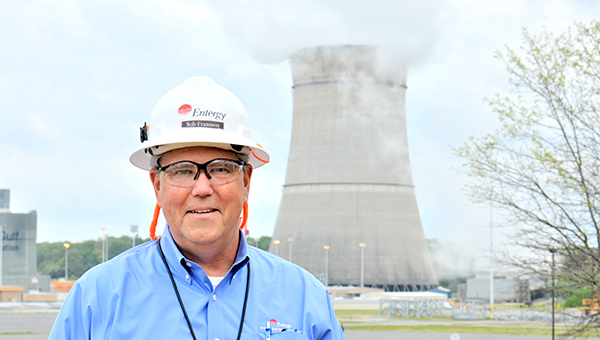 A reactor engineer early in his career, he was working late one evening when the plant manager, “a fellow I had a lot of respect for,” Franssen said, wandered by and stopped to talk. He asked Franssen about his task, sharing that he, too, had once been a reactor engineer.

“Hey, I really appreciate the fact that you’re here this late, getting this done,” he told Franssen before he left. Franssen felt great after that exchange and took note. “It was a long day; I was there a long time. Just to have him stop — he didn’t have to — and talk to me for a few minutes and then to say thanks before he left, it just made me feel so good.

“People need to feel appreciated, and they need to feel valued,” Franssen added. “And I learned that, at that moment with that gentleman, and I carry that learning with me today at Grand Gulf and across our company. I want the team to know how much I appreciate their efforts and their nuclear professionalism.”

“I feel honored to be the site vice president here at Grand Gulf and work for Entergy,” Franssen said. “We have a team of highly dedicated nuclear professionals who strive to achieve excellence every day – all in partnership with the company and our nuclear fleet. Yes, we are facing challenges, but I am where I want to be, and I cannot see myself anywhere else.”

A Pennsylvania native, with more than 36 years of nuclear experience, has an aptitude for math and science, Franssen found his way into nuclear engineering through his college advisor at Penn State University.

Franssen’s senior reactor operator experience — earning his license, working as a shift supervisor and shift manager — was invaluable, he said, opening his eyes to all the things it takes to lead a large team in operating a nuclear power plant safely, securely and reliably.

The year 2020 brought the biggest challenge of Franssen’s career, when COVID-19 hit amid a scheduled refueling and maintenance outage, with an extra 1,500 contractors onsite. “The entire Grand Gulf team rose to the occasion again and again and again. I am very proud of them.”

Work completed during Grand Gulf’s 2020 refueling outage addressed some performance challenges, as Entergy invested in significant upgrades to improve plant reliability, Franssen said. Upgrade-related issues later in the year resulted in time offline, and the company worked to identify them, conducting an outage to make corrections.

“During the historic ice storms earlier this year, we operated at 100 percent power throughout,” Franssen said. “I am proud of the fact that we kept power flowing to our stakeholders.”

Franssen makes his Mississippi home in Vicksburg. He’ll mark his 36th anniversary with his wife, Deb, this year. Their four sons — Sam, Tony, Bobby, and Jordan — have blessed them with nine grandchildren. Franssen happily counts down the roster: Alena, Rocco, Ceci, Reigh, Joel, Rosie, Emilia, Eliza, and Evie. “I love going to watch them play soccer and basketball. That part has just been fun. But what’s really neat is seeing my boys become dads.”

Franssen enjoys living in the local community. “I’ve found the people in the areas of Vicksburg, Port Gibson and Claiborne County to be wonderful,” both at work and in town. “They have a strong sense of community and want to support each other, and that fits perfectly with my own personal mental model.”

With its 800-plus employee workforce, Grand Gulf has a robust impact through community engagement, such as its home winterization drive, park cleanup and other volunteer efforts that help improve local lives while teambuilding for the plant. “The community sees us as a friendly, supportive, important presence,” Franssen said. “We will continue being active leaders in the community.”

Franssen finds high levels of teamwork and dedication, positive energy, and good morale at Grand Gulf. “You look at what this team has accomplished together, not only what we’ve done to improve performance, but the challenges that we’ve faced and met.

“Other stations may have been demoralized by the challenges we faced, but this team of nuclear professionals at Grand Gulf has not done that,” Franssen said.

“There’s a lot of pride in what we’re doing,” he said, from its important role in producing electricity to the critical job of making it with carbon-free nuclear power, and the proper care and safety required. Also, Grand Gulf, currently licensed to 2044, is important to Entergy’s drive to achieve net-zero emissions by 2050.

As Franssen thought about this job, “we have the team members, capital investments and support to operate Grand Gulf for the long haul. That makes me excited.”