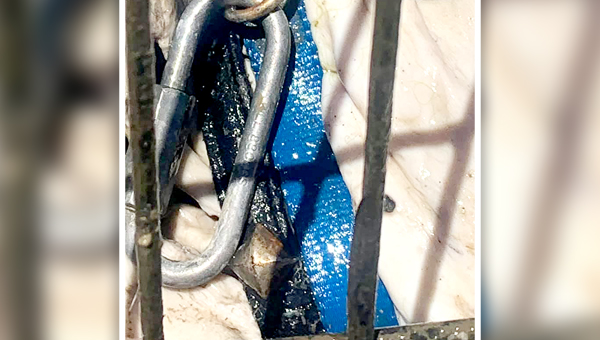 Animal control officials and the Vicksburg Police Department continue to work the case of a dog that was found dead while restrained in a cage floating in water Monday.

Monday morning, officers responded to a report of animal cruelty on Ford Road in the Kings community. Animal control personnel discovered the body of a dog, possibly a male pit bull, floating inside the cage in floodwater.

According to a release from the police department, the exact cause of death of the animal could not be determined due to the condition of the body after it was removed from the water.

Wednesday, animal control officials released an image of two collars the dog was wearing — including a black collar with metal studs — to help better identify the dog. There were no other identifying features, such as tags, that have helped in identifying the dog or its owners.

“This dog has no fur on it so do not go off the fact that it looks white,” officials said in sharing an image on social media. “We found a small patch of hair that may have been a light brown color or could have been from the nasty flood water.”

Anyone with information regarding this case is asked to contact the Vicksburg Police Department at 601-636-2511 or the City of Vicksburg Animal Shelter at 601-636-6982.