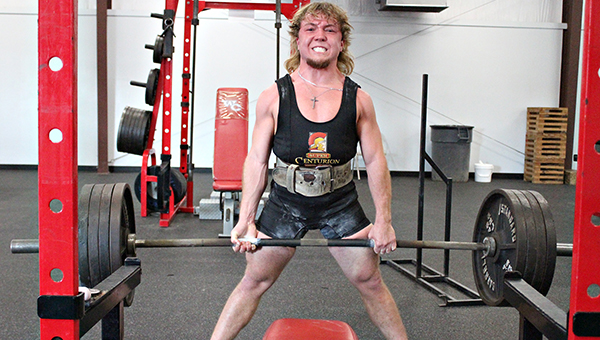 As a sophomore, he hasn’t gotten to play a whole lot for Warren Central’s varsity team yet. And, tipping the scales at only 5 feet and 135 pounds, he’s not exactly anyone’s idea of a prototypical linebacker.

Football, however, is not Gordon’s only sport, and when he trades in his shoulder pads for a weightlifting singlet he immediately transforms into a hulk.

Gordon is, pound for pound, one of the strongest athletes in Mississippi. He bench presses 225 pounds, squats 425, and deadlifts 410. He’s qualified for the MHSAA Class 6A powerlifting state meet for the third year in a row — in the third different weight class — and is gunning for his first state title when Mississippi’s top lifters assemble Saturday at the Mississippi Coliseum in Jackson.

“Most people as they move up in weight class it gets harder. They’re not as competitive. He’s just excelled every year, in every weight class he’s been in,” Warren Central powerlifting coach Chad McMullin said. “He did a fabulous job last year. I think he had a shot to win state if we’d have had state. This year we’ve got just as good a shot.”

Despite his small stature, Gordon has shown he’s a natural powerlifter. McMullin, a longtime family friend, recruited Gordon while he was still in junior high — “He came up to me at church and said, ‘Hey, come join my team,’” Gordon recalled with a laugh — and he made an immediate impact with the varsity team.

Gordon won North State championship in the 114-pound weight class as an eighth-grader and finished sixth at the state meet.

“I saw how thick he was getting going into sixth and seventh grade. He was already defined and muscular at that point. I started talking to his dad and mom, ‘Can we do this?’”

McMullin said. “I started him real slow and he was progressing at a level that was almost a 10th or 11th-grade level when he was in eighth grade. I kept telling his dad that he can do a lot more.”

“I was looking forward to state. It is what it is,” Gordon said, philosophically. “It’s ninth grade, I’ve still got a couple more years, I just have to get better. If I was a senior it would have been a lot different.”

Undeterred, Gordon went back to work to make his sophomore powerlifting season his best yet. He moved up another weight class, to 132 pounds — lifters in that class can weigh as much as 136 on the day of competition — and won his third straight North State championship.

Gordon set several meet records in the various lifts at both the Region 2-5A meet and the North State meet, and lifted a total of 1,015 pounds in the squat, bench press and deadlift at the latter.

“Lifting a lot of weights. Football kept me in shape, lifting with them,” Gordon said
McMullin, acting as both coach and mouthpiece for Gordon, said it’s been fun to watch him develop into one of the state’s best.

“He’s modest. But it is cool that you can walk around saying, ‘I made state three years in a row,’” McMullin said. “To watch his maturity process from when he was this tall to as he’s gotten older has been great.”

Gordon’s path to the 132-pound championship is not an easy one. Although he cruised to the North State title, two other lifters from the South half of the state were within 75 pounds of his total and another was well above.

Harrison Central senior Atavian Ray is the favorite in the 132-pound division after totaling 1,290 pounds at the South State meet. Ocean Springs’ Gabe Beemon totaled 995 pounds and Gulfport’s Malachi Walker was at 940.

Ray’s best deadlift at South State was 160 pounds better than Gordon’s, accounting for most of the difference. Ray has set two state records this season, in the deadlift (560 pounds) and the squat (505).

Barring a disaster or an injury Gordon should be in contention for a medal, but McMullin said it will take some strategy and perhaps even a bit of luck to make it a gold one.