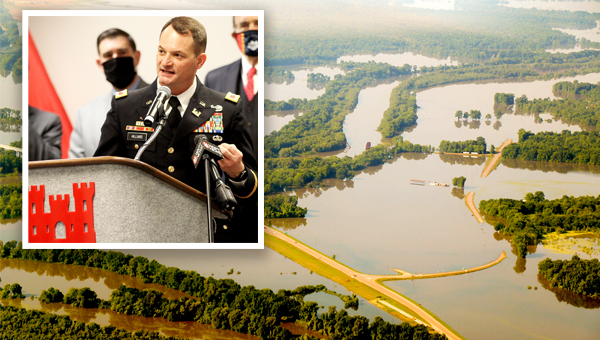 Moving ahead: Work under way on completing backwater pumps project

The Corps of Engineers gave its final approval to the project in January and completed requirements under the National Environmental Protection Act, clearing the way for the pumps to receive funding with other Mississippi Rivers and Tributaries projects.

“We received about $9.2 million in the (fiscal) 2021 work plan and got the money in March,” Hilliard said. “We are moving out to the design of the project — the pump station itself — as well as getting a jump start on mitigation and that’s what we’re going to use that money for in this fiscal year.”

Hilliard said some of the money allocated will be used to acquire 2,400 acres of land for wetlands mitigation, acquiring land at the Deer Creek pump site, and property surveys and soil borings.

He said District engineers are presently building the project’s construction schedule, which will provide an estimate for future funding.

“We’re working with our senior members in the Corps of Engineers to help educate new members of the administration on all of the aspects and the importance of the project,” Hilliard said. “We don’t know yet what funding’s going to be available for fiscal year 2022.”

Peter Nimrod, chief engineer for the Mississippi Levee Board, said the Corps’ work involves more than the pre-construction engineering.

The Corps, he said, is involved with several activities related to the project, including working with the U.S. Fish and Wildlife Service on protecting the pondberry, an endangered plant species found at pond margins, swampy, seasonally flooded wetlands, poorly drained areas and pinelands.

“They’ve (the Corps) got a lot of irons in the fire,” Nimrod said. “They’ve got to get a state water quality certificate for the project and they’ve started making those inroads with MDEQ (Mississippi Department of Environmental Quality).”

While the Levee Board is excited to see the Corps moving forward with the pumps, Nimrod said, “Obviously, we’re not happy with lawsuits,” referring to a federal lawsuit filed Wednesday seeking to block the pumps.

American Rivers, the National Audubon Society, the Sierra Club and Healthy Gulf filed the lawsuit in federal court in Washington, D.C., Wednesday against the Corps and U.S. Fish and Wildlife Service.

The same group sued the Environmental Protection Agency in January in an attempt to block the construction of pumps in the Yazoo Backwater area.

In a statement issued Wednesday evening, the Levee Board called the suit “a disingenuous and dangerous attempt to prevent responsible management of flooding in the Delta that protects human and animal life.

“The historic flooding of the last three years wiped out generations of wildlife — including the only endangered species in the area, the pondberry, which simply cannot survive underwater for six months,” the statement continued. “The flooding has also tragically taken two human lives and destroyed hundreds of homes. With an impoverished and minority community as our constituents, flood control is especially important to us.”

The federal decision to move forward is consistent with applicable laws and sound science showing that reducing flood duration and height is not only good for homes, roads, and people, according to the statement, but also provides multiple environmental benefits.

“As proposed, the Yazoo Backwater Pumps will save lives while increasing wetland, terrestrial, aquatic, and waterfowl resources and reforestation. The addition of 34 supplemental low-flow groundwater wells will also improve water quality and raise water levels during low-flow season through responsible and modest flood mitigation,” the Levee Board said in its statement. “Our community is tired of having national groups including American Rivers, National Audubon Society, Sierra Club and Healthy Gulf — none of which are based in Mississippi – trying to stop critically needed, life- and livelihood-saving local projects.

“The Mississippi Levee Board will work with the federal agencies, seek to intervene in the suit, and continue to advocate for completion of the Yazoo Backwater Pumps to keep Mississippians safe.”

“They (the plaintiffs) don’t realize the pumps will help the environment; help the things they want to be helped,” Nimrod said. “The good news is the Corps is working on the pumps — actively working on it. We should prevail; science and the facts are on our side.”