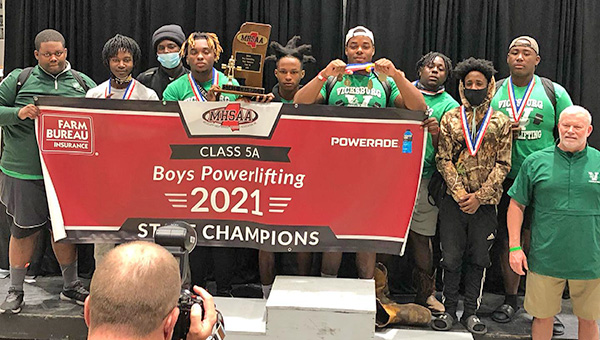 Vicksburg High’s powerlifting team poses on the podium after winning the MHSAA Class 5A championship on Saturday. Six of the team’s eight lifters won individual titles, and the Gators brought home the team title for the first time since 2006. (Photo courtesy of Jimbo Nowell)

JACKSON — Vicksburg High’s powerlifting team flexed its muscle Saturday and walked away with a state championship.

Six of the team’s eight lifters won individual titles, another finished second, and the Gators totaled 49 points to easily claim the MHSAA Class 5A championship.

It is Vicksburg’s third powerlifting state title, along with others won in 2003 and 2006. It is also Vicksburg High’s first team state title in any sport since 2006.

Truitt lifted a total of 715 pounds in the deadlift, squat and bench press to squeak past East Central’s Colby Gray, who lifted 705 pounds.

Another VHS lightweight, Nick Mickey, finished second in the 148-pound weight class with a total of 1,020 pounds.

The Gators had four lifters competing in the heavyweight portion of the meet in the afternoon, and they authored a clean sweep to carry the team across the finish line.

Hicks tied with Central Holmes’ D’Monte Williams for the 242-pound title, with both totaling 1,445 pounds. The tiebreaker is body weight, and Hicks weighed in two pounds lighter than Williams, which gave him the state title.

Montgomery finished the Gators’ victory with a victory lap in the super heavyweight division. He lifted 615 pounds in the squat, 390 in the bench press, and 600 in the deadlift for a total of 1,605 pounds. That was 160 more than runner-up Josh Battles of Pascagoula, who managed 1,445 pounds.

Vicksburg’s 49 team points were more than double that of runner-up Lake Cormorant, which had 32. Pearl River Central was third with 22 points.

Harrison Central’s Atavian Ray totaled 1,300 pounds in the squat, bench press and deadlift to shatter the 132-pound state meet record. Gulfport’s Jaquan Foster had held the record since 2016, when he totaled 1,145 pounds. 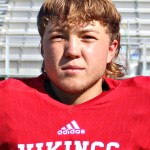 Ray bettered his own Class 6A record in the squat by 10 pounds, with a 505-pound lift. His only bench press attempt was 240 pounds, and he deadlifted 555 to break the Class 6A record by 70 pounds. His 1,300 pound total also set the overall state record in the 132-pound division, and he finished his career with the overall state records in the squat, deadlift and total weight.

Ray had set the overall state squat and deadlift record at other meets earlier this season.

Gordon totaled a personal-best 450 pounds on the squat and 225 on the bench press, and then deadlifted 405. Walker deadlifted 435 pounds on his final attempt to just barely squeak past Gordon and into second place.

“Lane missed his first bench attempt on an uneven lockout, so we had to redo it. That only left us with two deadlifts. That hurt. It gave the Gulfport kid the advantage, and he just had a better deadlift,” Warren Central coach Chad McMullin said.