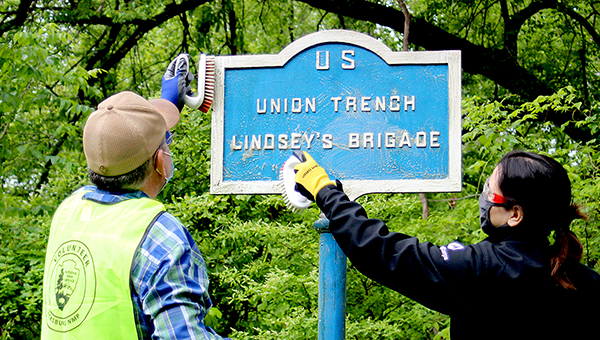 Roger Wilson of Bastrop, La., right, and Kristyn Pompa, clean a marker identifying the location of a Union brigade in the South Loop area of the Vicksburg National Military Park during Park Day. The event was sponsored by the American Battlefield Trust to encourage people to preserve and maintain American battlefields. (John Surratt/The Vicksburg Post)

Joshua Sharp and his wife Madison hovered over a blue metal marker along the south loop of the Vicksburg National Military Park, scrubbing it with brushes to remove the effects of exposure to the elements.

“We’ve been volunteering at the park for four years,” he said as his infant son, Thaddeus, rested in a carrier on his father’s back. “We’re involved in living history and we’re part of the cannon crew. You learn more history when you get involved. You learn the park is more than a place to go for exercise or to ride a bike.”

Volunteering, Sharp said, “Is fun; you learn about the history of the battle and there’s the camaraderie.”

The Sharps were part of a small group of volunteers who came out the Military Park Saturday for Park Day, a program sponsored by the National Battlefield Trust to encourage people to become more involved in the preservation of the country’s battlefield sites.

“There are volunteers volunteering at battlefields throughout the country, not just at national parks but at the state level, local level and parks managed by nonprofits,” said Brendan Wilson, chief of interpretation, education and partnerships at the Vicksburg National Military Park. “It’s an opportunity for folks to get out and serve and to volunteer and help maintain (parks) and do projects all over the country.

In the past, projects at the Military Park involved removing downed tree limbs and branches, removing weeds from monuments and painting cannons. This year, Wilson said, work concentrated on cleaning the markers in the south loop area, which includes the Railroad Redoubt, a significant battle during the Siege of Vicksburg.

“The markers were put out by the War Department during the origin of the park to mark unit locations and actions,” Wilson said. “We’re cleaning them so they look nice and to help maintain them. The Union markers are blue and the Confederate markers are red. We work with our cultural resource staff and there’s a certain way that we clean them and use particular materials.”

According to the park’s website, the legislation establishing the Vicksburg National Military Park in 1899 directed the secretary of war to mark the lines of battle. It also gave sole authority to the states involved in the campaign, siege and defense of Vicksburg to erect monuments and markers in memory of their soldiers.
Under the law, the secretary of defense had to approve the location, design, and inscription of all memorials placed upon the battlefield. The director of the National Park Service and the secretary of the interior now must approve markers and memorials.

During World War II, about 145 of the largest and heaviest cast iron tablets and markers were melted down and used in the construction of military supplies and equipment.

Because of the increased cost of metal after the war, park officials were able to replace a few monuments, but in 2007-2008 a support group, the Friends of the Vicksburg National Military Park and Campaign, initiated an effort to replace the missing tablets and markers and worked with the secretary of the interior and the director of the National Park Service to recognize and dedicate the replacement of 22 large tablets in October 2008.