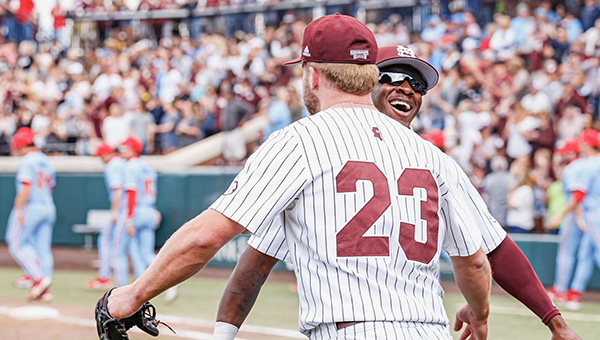 STARKVILLE — For the fifth year in a row, Mississippi State is the king of Mississippi’s baseball diamonds.

Tanner Allen hit a tiebreaking, bases-clearing triple in the bottom of the sixth inning, and the Bulldogs went on to beat Ole Miss 7-5 on Sunday in the finale of their three-game series at Dudy Noble Field.

Mississippi State (27-8, 10-5 Southeastern Conference) won the season series against Ole Miss (26-10, 9-6) for the fifth consecutive year. The Bulldogs also moved into second place in the SEC West at the midway point of the conference schedule.

Allen’s triple capped a five-run rally that gave Mississippi State the lead for good. Hayden Leatherwood hit two home runs, a solo shot in the fourth-inning and a two-run shot in the sixth, to help Ole Miss take a 4-2 lead.

Then, in the bottom of the sixth, the Bulldogs got busy. Three consecutive singles, the last by Brayland Skinner, brought in a run, and two batters later Scotty Dubrule added another base hit to tie the game at 4.

Allen then tripled to right center field, clearing the bases and giving the Bulldogs a 7-4 lead.

“I turned to one of my coaches and said, ‘This is the guy we need at the plate in this moment.’ If anyone is going to be able to do it, it is going to be him,” Mississippi State coach Chris Lemonis said. “It was a great match up for us at that point and a good match up for them too. When (Ole Miss reliever Taylor Broadway) fell behind 2-0, we had a feeling TA was going to get a swing off. He has been really good lately, when we need a big hit, he has gotten it for us.”

Ole Miss left the bases loaded in the seventh inning, got one unearned run in the eighth, and then went quietly in the ninth. Mississippi State closer Landon Sims worked around an error in the ninth to earn his fifth save.

Allen’s triple was his only hit of the game. Rowdey Jordan led the Bulldogs at the plate by going 4-for-5 with a solo home run and two runs scored, while Dubrule was 2-for-4 with one RBI and one run scored.

Leatherwood went 2-for-4 with two home runs, three RBIs and two runs scored for Ole Miss.
Mississippi State won its third consecutive SEC series, and has won 10 of its last 11 games overall. It will host UAB in a midweek game Tuesday night, and then go on the road for a three-game series at Vanderbilt beginning Friday.

Ole Miss, meanwhile, lost its third conference series in a row. It will begin an eight-game homestand Tuesday against Little Rock, and face LSU in its next SEC series beginning Thursday.

Whenever I scroll through Facebook these days, one of the more interesting pages I come across are those dedicated to... read more