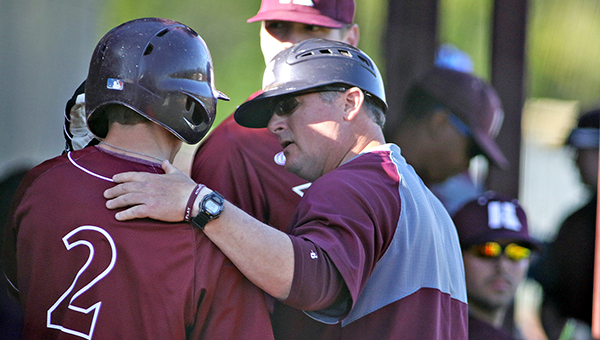 As he crested the age of 50 and started to evaluate his life, career, and the decade ahead, Hinds Community College baseball coach Sam Temple said he came to a conclusion.

“It’s time to spend a lot more time with the Temples,” he said.

And, with that, the hard-driving and demanding coach put three Mississippi junior college state championships in the rearview mirror for the opportunity to spend time with his three teenage children. He traded a job he’d done well for 16 years for one he previously held 19 years ago.

Temple was hired as Clinton High School’s baseball head coach and assistant athletic director on April 12, ending a successful era at Hinds with no regrets and a smiling eye on the future as he works in his adopted hometown.

“I have taken four jobs now and never moved out of the city of Clinton. That doesn’t happen for a lot of coaches,” he said. “My children all go to Clinton Public Schools, my wife is very involved in the PTO, and I have got a great calling to return to the community of Clinton as the baseball coach.”

Temple, a Vicksburg native who led Warren Central to the 2001 MHSAA Class 5A championship, first was hired as Clinton’s head coach in 2002. He only spent one season there before becoming an assistant at Mississippi College and then the head coach at Hinds in 2005, but has kept his home in the city.

Temple said returning to the high school level at Clinton was a chance to get more involved in the community he calls home, while also spending time with his family. His son Garren is a senior at Clinton High, his daughter Grayson plays on the school’s tennis team, and another son Gage is entering middle school. Wife Kristen is heavily involved in the school’s parent-teacher organization and other endeavors.

“I’m really excited about getting involved back at the high school level. That includes summer programs, junior high programs and the high school programs, and really live amongst the community and get involved with young people’s lives,” he said.

Returning to the high school level after leading one of the state’s top junior college programs for 16 years will take some adjustment, Temple admitted. Rather than a full fall season at Hinds, for example, he’ll now have strict time limits on offseason practices. Rather than recruiting Division I talent, he’ll have to scout Clinton’s youth baseball programs for promising players.

“I understand that high school baseball has changed since I last did it. It’s definitely a grind. Like the fall, you get to work in your last block period to lift weights, throw and run, but there’s a limited time you can do that and when that time ends, it stops. In junior college athletics, there’s no stop,” he said. “We’re out here in the fall playing ballgames and practicing four or five hours a day from late August to November. I love that. I thrive on that. But in all of that is sacrifices. This is an opportunity, with time being limited, that I see to spend more time with my family.”

Temple also is looking forward to a different side of the job, where he gets a chance to work closely with and develop players.

“A lot of times at this (junior college) level, we’re all coaches but we do a lot of managing. At the high school level not only do you manage but there is a lot of pure coaching where you’re teaching people to play the game,” he said. “I can’t find any negatives going back to that level, where I get to get back to that level of coaching young men.”

Temple wasn’t sure exactly when he would start at Clinton. He is still under contract at Hinds and will finish out the 2021 season. Hinds has a 15-13 record, and its final regular-season game is April 24.

He said reaction to the news of his move from current and former Hinds players, as well as alumni and fans, over the past week has been overwhelmingly positive.

“It’s absolutely been stunning the true outpouring of alumni, of community, Hinds, and especially the players that play now, being happy for me. That means I did some things right,” he said.

The numbers back up Temple’s statement. In 16 years at Hinds he has sent 148 players to four-year colleges, with 86 of those signing with NCAA Division I programs.

Temple has won 436 games with the Eagles, three Mississippi state championships, and two Region 23 titles that sent the team to the NJCAA College World Series. His 2014 team lost in the national championship game.

“There’s no way I can put into words how proud I am of this program, and the players that have played and the coaches that have coached in this program,” Temple said. “I learned very early in my career that if you surround yourself with good people then good things will happen, and that is what I’ve tried to do.”

Temple added that, as enjoyable as Hinds’ on-field success has been over the years, he’s gotten even more satisfaction from helping his players grow and giving them opportunities off the field.

“My goal was for young men to come here and use this place for what it should be, and that’s the opportunity to open up for baseball at the next level or at least figure out what they want to do educationally. I think we’ve served that purpose here, and the numbers bear that out,” Temple said. “I attempt to build men through baseball. I’m hoping there’s a lot of young men out there who look at their time here and hope they’re a better man where they’re at now because they were influenced by this program.”