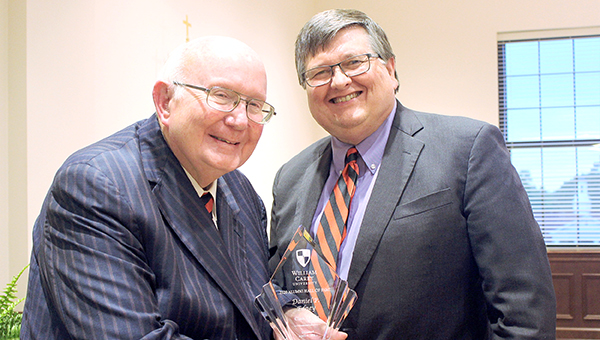 William Carey University inducted four people — including one from Vicksburg — into the Carey Alumni Hall of Fame during an awards dinner on April 9 at Tatum Court.

The ceremony was part of the university’s 2021 homecoming festivities, which were limited this year due to concern about the pandemic and the need to observe COVID-19 safety protocols.

“Last year, we had to cancel Homecoming due to the pandemic. We were thankful this year to be able to host a few Homecoming events like the Alumni Hall of Fame inductions,” said Pam Shearer, WCU’s director of alumni relations. “I was honored to participate in inducting these impressive graduates into our Alumni Hall of Fame. They are William Carey’s 2020 honorees. Our 2021 inductees will be the guests of honor later this year during a separate awards dinner – and we’re planning a full homecoming schedule for April 1-2, 2022.”

Among the 2020 Alumni Hall of Fame inductees is Vicksburg physician Dr. Dan Edney, a 1983 graduate of William Carey.

He practices internal and addiction medicine in Vicksburg and is active in medical mission work, having traveled to Indonesia, Lebanon, Haiti, Kurdistan and Nepal with Mississippi Baptist Disaster Response as the medical team leader. He founded the First Baptist Church Medical/Dental Ministry and has served as trustee and chair of the Baptist Medical Dental Missions International Board.

In March, he joined the Mississippi State Department of Health as chief medical officer and regional health officer for the Central Public Health Region.

As a student, he was president of the Student Government Association. He has been an active alumnus, serving as trustee and chair of the William Carey University board and receiving the Young Alumnus Award.

Edney’s wife, Lori, is also a 1983 William Carey University graduate. The couple has three children, Daniel, Meredith and Meg (Class of ’20); and two grandchildren, Benjamin and James. The Edneys are active members of First Baptist Vicksburg, where Dr. Edney is a deacon, Lori is a women’s ministry leader, and both teach Sunday school.

Rochelle Dahmer, Angela Hawkins and Brett Valentine were the other inductees.