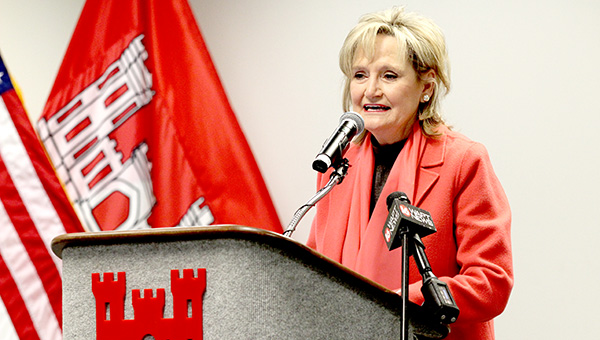 U.S. Sen. Cindy Hyde-Smith speaks during a January press conference at the U.S. Army Corps of Engineers Vicksburg District in which the Environmental Protection Agency announced their support for the completion of the backwater pumps project. (Tim Reeves/The Vicksburg Post)

Hyde-Smith: Not finishing pumps project is ‘one of the most egregious environmental injustices’

WASHINGTON — U.S. Sen. Cindy Hyde-Smith (R-Miss.) Tuesday identified the uncompleted Yazoo Backwater Area pumps as “one of the most egregious environmental injustices” as she sought continued Environmental Protection Agency cooperation on the project under the Biden administration.

“While I have a number of concerns regarding the American Jobs Plan, I am pleased that the package proposes measures to advance racial equity and environmental justice. Today, I would like to discuss one of the most egregious environmental injustices that I’ve observed in my lifetime,” Hyde-Smith said to EPA Administrator Michael Regan. “I hope the EPA, under your leadership, will be part of the solution. I am referring to the Yazoo Backwater Project, a U.S. Army Corps of Engineers flood control project authorized by Congress in 1941.”

In March 2020, the EPA began a review of decisions made in January under the Trump administration. This review includes the EPA’s approval of a new proposed plan by the U.S. Army Corps of Engineers to move toward constructing a pumping station for the Yazoo Backwater Area, and its determination that the new plan is not subject to EPA’s 2008 veto of a similar proposal.

The U.S. Army Corps of Engineers signed a Record of Decision on the new Proposed Plan on Jan. 15.

Hyde-Smith stressed that the lack of a pumping station for the Yazoo Backwater Area has resulted in millions of taxpayer dollars spent to fund a “giant bathtub” that harms the lives of Mississippians living in six Delta counties that are among the most rural and underserved in the nation.

“Where are we today? The area has experienced catastrophic flooding in nine out of the last 10 years,” Hyde-Smith said. “The flooding has cost lives, homes, businesses, jobs, and billions to the economy and the American taxpayer.  It has also done substantial harm to the environment and wildlife.”

Hyde-Smith credited the EPA for working with the U.S. Army Corps of Engineers and expressed confidence that the EPA, under Regan’s leadership, would perform an impartial review of the merits of the pumping station. She also suggested the administrator visit the area to understand in detail the dire need for the project.

“I am very committed to working with you in trying to solve this,” Hyde-Smith told Regan. “I do feel that you are very committed to environmental justice and that you will help on an impartial review of the project. And I’m asking you to find time to come to Mississippi to look at this. I would greatly appreciate that.”

Vicksburg mayoral candidate Troy Kimble is supplementing his campaign a week before the runoff against Shawn Jackson. In a campaign... read more