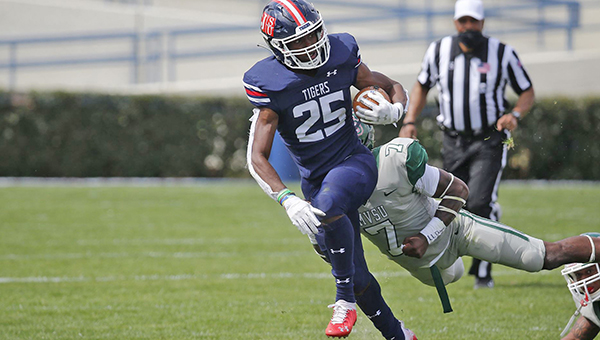 Jackson State running back Tyson Alexander (25) carries the football earlier this season. Jackson State announced that its game against Prairie View A&M, scheduled for Saturday in Jackson, has been canceled because of COVID-19 issues within its program. (Jackson State Athletics)

The university announced Tuesday that it has canceled Saturday’s season finale against Prairie View A&M due to COVID-19 protocols and contact tracing within its program.

The game was the last on Jackson State’s spring schedule and will not be rescheduled.

The Tigers finished head coach Deion Sanders’s first season with a 4-3 overall record, and 3-2 in the Southwestern Athletic Conference. The record includes what JSU is considering a 2-0 forfeit victory over Alcorn State, which opted out of the season before it began.

After winning their first three games, the Tigers lost their last three to Alabama State, Southern University and Alabama A&M while allowing an average of 40.3 poins per game.

Jackson State will open the fall 2021 season on Sept. 5 against Florida A&M in the Orange Blossom Classic in Miami, Fla.

For a while, the Vicksburg Missy Gators appeared headed for disaster. Needing only to win the game or lose by... read more