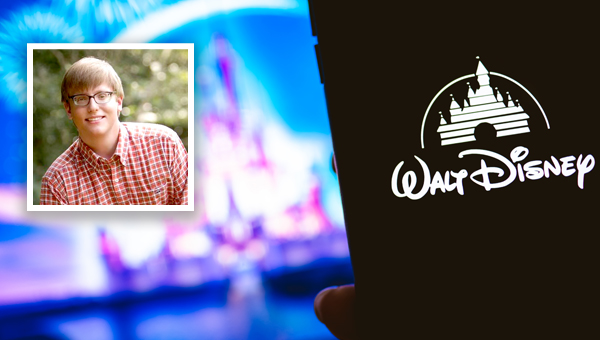 Gray Houser has been enamored with Disney World most of his life.

“For literally as long as I can remember,” he said.

And because of the Vicksburg resident’s theme park enthusiasm, he has been named as one of the guest speakers at ParksCon, a virtual convention geared toward fans excited about re-openings and theme park life getting back into full swing.

“ParksCon is a digital gathering of thousands of theme park fans to hear from Imagineers, designers, theme park influencers, bloggers, basically anyone of note in the community after a year of being away from the parks due to COVID-19,” Houser said.

As the youngest speaker at the convention, Houser’s talk will focus on Disney patrons with disabilities.

Houser is legally blind. He said after he talked with the event organizer before ParksCon “was a thing,” and when it came time to line up speakers, the organizer of the convention knew Houser was interested and would be a good fit.

“My talk will focus a lot on visiting the parks with a disability, so I will be sharing a little bit about myself and my past experiences in the parks and about how great and welcoming Disney is to everyone, but especially those with disabilities,” Houser said.

Calling it a “50-50″ percent split, with 50 percent going to the “awesome rides and theming and nighttime shows and food,” Houser said, the other 50 percent of what he enjoys about Disney World is its ability to adapt to all its visitors.

“They’ll really bend over backward to help you (those with disabilities) have a magical time,” he said.

Houser’s love of Disney World doesn’t stop at visiting the theme park or participating at ParksCon. Houser, who is a graduate of St. Aloysius and a junior at the University of Mississippi, has also developed a Disney app.

“I’ve always been pretty tech-savvy and was interested when I started the site in having an app primarily so we could send ‘breaking news’ notifications to readers. I think we’re on version 3.0 of the app now and I’m working on the next major update which will bring the app to Android devices for the first time, which is really exciting,” he said. “It should be available this summer.”

In addition to the Disney app, Houser is editor and podcast host at an online news site focused on Disney called “Monorail News.”

At the convention, which is scheduled to run April 26-28, Houser said he is really interested to hear from the Imagineers — the name given to Disney engineers who research and develop new attractions for its theme parks — who will be speaking, since he knows a couple of them who have been asked to present.

“And they always have great insights and fun stories, so I think that will be a blast,” Houser said.

ParksCon is open to anyone interested in participating and, because it’s a virtual convention, those interested can participate in your living room, Houser said.

“I think giving the tickets away for free helps with that too,” he said.