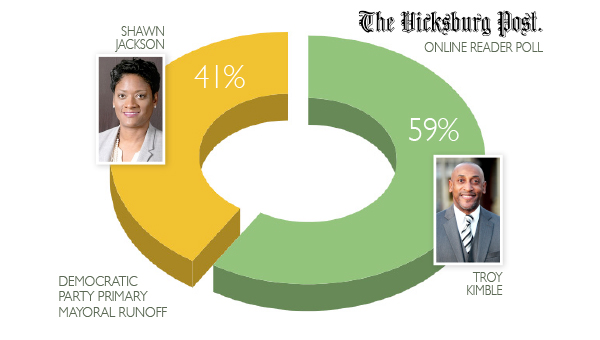 Poll: Kimble has slight edge over Jackson, but voter turnout will sway runoff

In a recent poll conducted by The Vicksburg Post, Troy Kimble shows to have a slight advantage over Shawn Jackson heading into Tuesday’s Democratic Party primary mayoral runoff.

While the poll shows Kimble with more support, Tuesday’s runoff will be won by the candidate who can get out their vote, perform in precincts they did not win earlier this month and win over undecideds.

In the April 6 primary, Kimble garnered just 16 more votes than Jackson (735-716), which was a difference of less than 1 percent.

Jackson, who represents District 3 on the Warren County Board of Supervisors, earned the most votes in four of the 11 precincts. Kimble, who is one of three county constables and who nearly defeated North Ward Alderman Michael Mayfield in June 2017, claimed slight victories in six precincts.

It is those votes earned by Thompson that will be a crucial component in who wins the runoff. Out of the 11 precincts, Thompson’s votes were more than the difference between Jackson and Kimble, meaning how his supporters break Tuesday could tip the balance to one candidate or the other.

Following the April 6 primary, Thompson declined to throw his support to either Jackson or Kimble.

In the mayoral race alone, less than 2,000 total votes were cast, which makes every vote cast Tuesday tremendously valuable.

The winner of Tuesday’s runoff will move on to face incumbent Mayor George Flaggs Jr. and Daryl Hollingsworth in the June 8 general election. Both Flaggs and Hollingsworth registered as independents, meaning they did not have to go through a party nomination process.

The Vicksburg Post’s online poll opened on April 9 and closed on April 20.

Chauvin guilty of murder and manslaughter in Floyd’s death