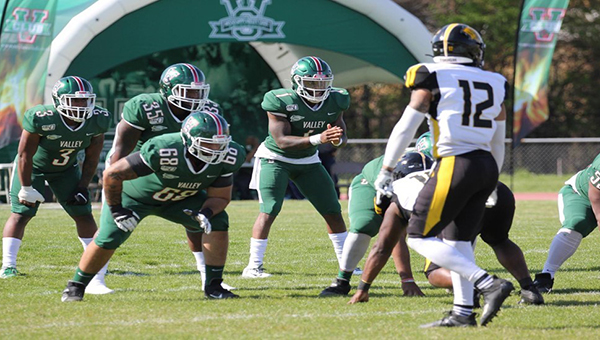 Mississippi Valley State announced that it has canceled its spring football season finale against Alabama A&M, scheduled for Saturday, because of COVID-19 issues within its program.

Also Wednesday, Arkansas-Pine Bluff and Texas Southern canceled their game, meaning all three games scheduled for this weekend were canceled because of COVID concerns. On Tuesday, Jackson State canceled its season finale vs. Prairie View A&M.

Alabama A&M (4-0) and Arkansas-Pine Bluff (4-0) are scheduled to meet in the SWAC championship game on May 1. The site of the game has not yet been determined.

The canceled games will not be rescheduled.

Mississippi Valley State only played three of its originally-scheduled six games this spring because of various COVID issues. Games against Texas Southern and Alabama A&M were canceled, and Alcorn State opted out of playing before the season began. The SWAC has awarded a forfeit victory to teams that were scheduled to play Alcorn.

Valley’s game against Alabama A&M was originally scheduled for March 6 and then postponed, before being canceled Wednesday.

Another game vs. Jackson State was postponed early in the season, but eventually played. Jackson State beat Valley 43-7. Valley finished with a 1-3 record that includes the forfeit victory over Alcorn.

Alabama A&M (4-0), meanwhile, finished its first undefeated regular season since 1966 and will play in the SWAC championship game for the seventh time. The East Division champs will face Arkansas-Pine Bluff next week.

Alabama A&M went 35 days between its season opener on March 6 and its second game on April 10. It defeated Jackson State 52-43 and Alabama State 38-14 in back-to-back weeks to claim its first East Division championship since 2011.

Arkansas-Pine Bluff (4-0) will play in the SWAC championship game for the third time, and first since winning the conference title in 2012.

St. Aloysius was cruising along toward a relatively easy victory in its baseball playoff opener when it entered what seemed... read more