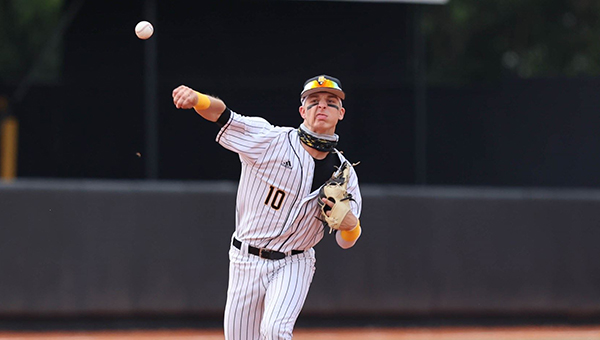 Not even another outstanding performance by Doug Nikhazy could keep Ole Miss from dropping another weekend series.

Ole Miss’ ace racked up 11 strikeouts in six innings, but LSU touched him for two runs before he left. That and a ninth-inning burst gave the Tigers a 7-2 victory, their second in a row over the Rebels, and the series victory.

Friday’s game was scoreless until the sixth inning. Gavin Dugas led off with a double, moved to second on a single by Braden Doughty, and scored on a fielder’s choice. An error and an RBI single by Tre’ Morgan put LSU ahead 2-0.

Ole Miss got a run back in the bottom of the sixth on a solo home run by Kevin Graham, but LSU blew it open in the ninth. Dugas hit a grand slam to give the Tigers a 6-1 lead, and Drew Bianco added an RBI single as they scored five runs on four hits in the inning.

Ole Miss got one run in the bottom of the ninth on an RBI single by Calvin Harris, but left two runners on base. It stranded eight runners in the game.

Dugas finished 2-for-4 with four RBIs and two runs scored for LSU, and Morgan went 3-for-5 with one RBI and one run scored. A.J. Labas pitched a complete game. Labas allowed 10 hits but only the two runs and one walk, and struck out six.

Vanderbilt 6, Mississippi State 2
Kumar Rocker struck out eight batters in his first complete game of the season, Isaiah Thomas and Cooper Davis drove in two runs apiece, and No. 2 Vanderbilt (30-6, 12-4 SEC) beat No. 4 Mississippi State (28-9, 10-6) in the opener of a big SEC series in Nashville.

Thomas hit a two-run single in the fourth inning as the Commodores scored four times to take the lead for good, 4-1. Davis singled in two more runs in the eighth to make it 6-1.

Mississippi State’s runs came in the first inning and the last. Kamren James had an RBI groundout in the first inning, and Luke Hancock an RBI single in the ninth. The Bulldogs only got three hits off of Rocker (9-1), who hit one batter and walked none.

Leadoff hitter Rowdey Jordan had two of Mississippi State’s hits and scored one run. He led off the game with a double and scored on James’ groundout. Rocker retired 17 of the next 18 batters after Jordan’s double.

Mississippi State and Vanderbilt will play again Saturday at 7 p.m. The game will be televised on ESPNU.

Southern Miss trailed 5-4 heading into the bottom of the eighth when Gabe Montenegro led off with his team-leading 14th double. Montenegro collected three of the Golden Eagles’ 11 hits in the contest.

Reed Trimble followed with a double of his own to center to score Montenegro to tie the game. After a sacrifice by Brady Faust and a sharp lineout to third by Christopher Sargent, left-hander Reece Ewing hit a ball the other way into left-center field. It looked like Ty Crittenberger was going to catch the drifting fly ball to end the inning, but the ball caromed off his glove, allowing Trimble to score the go-ahead run.

The teams continue the series with a doubleheader Saturday, beginning at 2 p.m.