Runoff ahead: Tuesday’s vote to fill the final spot in June’s general election 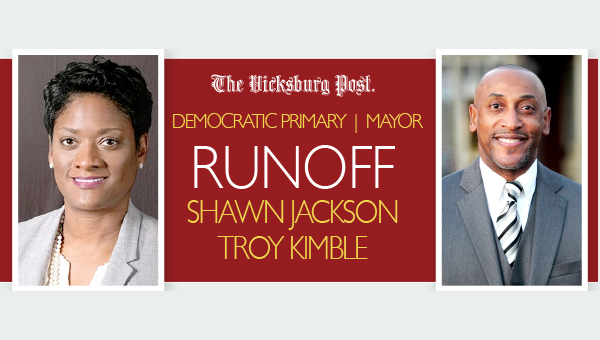 Tuesday’s runoff between Shawn Jackson and Troy Kimble will determine the Democratic Party nominee for Vicksburg mayor. The winner faces incumbent Mayor George Flaggs Jr. and independent candidate Daryl Hollingsworth. Like the Democratic primary, any registered voter living in the city can cast a ballot in the runoff.

The April 6 party primary was marked by confusion on the part of some voters who showed up at the county precincts inside the city where they voted for president instead of going to their city precinct to cast their ballot.

Osborne said voters who went to the wrong precinct were directed to the proper location by the precinct manager, who called city election commissioners or the Warren County Circuit Clerk’s Office to find the proper precinct.

Extra staff will also be available to help voters to the right precinct.

“This time, each precinct manager will have a master voting roll of active voters,” Osborne said. “If a voter shows up and is not at the right precinct, that manager can look the name up and tell the voter which precinct to go to vote without calling the clerk’s office.”

He said nothing has changed with the municipal precincts. “It’s just that they (voters) forgot that in municipal elections, they may, depending on where they live, vote at a different precinct than where their county precinct is.

If someone has questions about voting, Osborne said, they should call the City Clerk’s Office to learn where their precinct is.

“If they vote affidavit at the wrong precinct, their vote will not be counted because they are on the poll book at another precinct,” he said.

“We got several calls during the primary because the poll managers were instructed that if a voter shows up at a precinct and their name does not show up in the poll book, they contact the election commission office here at City Hall or the Circuit Clerk’s Office,” Osborne said. “Those managers have all those numbers to determine if that voter is an active voter and where they would vote.”

He said there were several instances where voters were inactive, meaning their address changed for some reason and they did not notify the Circuit Clerk’s office or his office about the change of address.

“What prompts a voter being inactive is also due to the fact that if a jury summons was sent and returned marked ‘address unknown;’ that’s a sign that voter had moved,” Osborne said. “The only way to determine the correct address is when they come to the polls to vote and they give their new address.

Osborne said no one was denied the right to vote.

“Any voter who showed up at a polling place was instructed to where they needed to go,” he said. “If that manager didn’t know, they called this office or the election commission and given instructions what to tell that voter.

“The ones who voted in the first primary should know where they vote in the runoff,” he said.