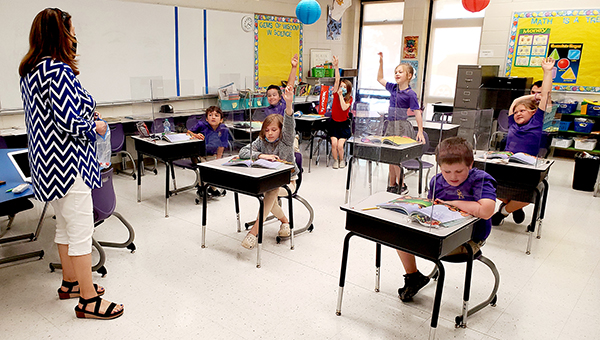 Barbara Hill looks for a response from students during a class to prepare children for their First Communion at St. Paul Catholic Church. The 12-week instructional program prepares the children for the sacraments of Reconciliation and Communion. (John Surratt/The Vicksburg Post)

May 2, seven children will take a major step in their lives as Catholics when they join their parents and take their First Holy Communion at St. Paul Catholic Church.

“St. Paul traditionally holds its First Communion the first Sunday in May; in 2020, we did it in August because of COVID,” said Barbara Hill, who is the instructor for the 12-week program at St. Francis Xavier to prepare the children for the sacrament of Reconciliation and the Eucharist.

“Blessed,” she said, “Is really a wonderful program. It has workbooks and videos that go along with it five-to-six short programs. The videos were produced by Disney because they really wanted to attract kids and get their attention.

“The program is about a family; there is a St. Francis Church and school, and they think it’s cool because their school is St. Francis,” Hill said.

The classes began in January with the first six weeks devoted to the sacrament of Reconciliation. The final six weeks involve the Mass and First Communion.

“I have the students doing different projects, like writing letters to Jesus on different topics and it really gets down into it — what First Communion is,” Hill said.

She said the “Blessed” program “Is a great little series to introduce them to the Eucharist. It puts it in a way the children can understand.”

The programs on Reconciliation, she said, explain to the children that God is a forgiving God and loves no matter what we do.

Hill, who has been instructing the children who will receive their First Communion at St Paul, said the children need the extra instruction so they can understand the two sacraments.

“They need extra instruction so they understand this is a special time in their life,” she said. “From now on so it’s a whole new holy time for them in the Catholic Church that’s why they take additional instruction.”

During her first few years as instructor, Hill said, “I didn’t have much to go on; I pulled things. The subject matter in the program she uses now, she said, is more focused and more informative to better prepare the children for First Communion.”

She said the children ask questions during the classes, and they had a lot of questions about Reconciliation.

“Main point for Reconciliation is God will forgive you, no matter what,” Hill said. “He’s there for you. It doesn’t matter what you’ve done. It’s like your parents; whatever you do, they’re going to forgive you and love them as long as you’re sorry. That’s basic.”

She said St. Paul’s pastor, the Rev. Rusty Vincent, came to one class and talked with them about Reconciliation.

“He told them they can say anything they wanted to and he couldn’t tell anybody or else he couldn’t be a priest anymore,” Hill said. “He got his point across.”

Vincent and St. Paul youth minister Wilson Locke did a “pretend” confession so the children could see what it was like.

“I told them, ‘You’re going to feel like a weight is off your shoulders,’” she said. “Father assured them he may guide them. They have already had their reconciliation, which was done at a special time.”

The children, Hill said, are excited and nervous about what is happening around them.

“It feels good to be with my friends and learning to be nice,” second-grader Ian Flores said.

Lizzie McSherry, who is also in second grade, said it was fun to learn about the Eucharist. The program, she said, “is helpful with our prayers; we’re learning a lot of prayers.”

Second-grader Grayson Grant said he enjoys the class and learning about Jesus, while third-grader Bobbi Foley thinks the class “is fun; you make friends and learn stuff about Jesus.”

The students finish their classes April 27, but they will still have work to do before May 2.

“We’ll have a practice at the church,” Hill said. “The children will do the readings and the prayers for the faithful and crown Mary during the mass.”