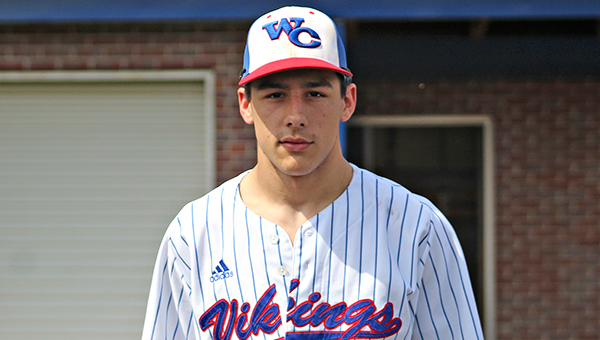 Warren Central baseball player Blake Channell went 2-for-3 with a double, one RBI and one run scored in a 19-9 loss to Northwest Rankin on Friday.

Warren Central’s five-game winning streak came to an end Friday, but the Vikings sure went down swinging.
Nick Monistere doubled, walked twice, and scored five runs, Brady Thomas went 2-for-3 with three RBIs, and Northwest Rankin outslugged Warren Central 19-9 in the regular-season finale for both teams.

Warren Central (9-17) scored nine runs or more for the sixth game in a row. Unlike the previous five, when it feasted on some of the weaker opponents on its schedule, this offensive outburst came against a strong

Northwest Rankin (18-6) squad that won the Region 6-6A championship and earned a first-round bye in the MHSAA Class 6A playoffs.

Jack Wright went 2-for-3 with two RBIs, and Blake Channell was 2-for-3 with one RBI and one run scored for Warren Central.

Floyd Davenport also continued his hot streak by going 2-for-2 with a walk and two runs scored. Davenport is batting .714 (10-for-14) and has scored 11 runs in his last five games.

Seth Sterling, Cooper Orman and Wright hit three consecutive doubles in the top of the first inning, and Channell drove in a run with another double two batters later, as the Vikings stunned Northwest Rankin by scoring five runs. Warren Central cooled off a bit after that, however, while the Cougars got their bats cranked up.

Northwest Rankin got two runs back in the bottom of the first and scored in every inning of the five-inning, run-rule shortened game. It scored seven runs in the second inning — with the only hit an RBI single by Brice Ainsworth — to go up 9-5 and never trailed again.

Northwest tacked on two runs in the third inning, three in the fourth and five in the fifth to finish it off.

Northwest only outhit Warren Central 9-8 in the game. The difference was WC’s mistakes. The Vikings committed eight errors, while five pitchers combined to walk 11 batters and hit two more. Eleven of Northwest Rankin’s 19 runs were unearned.

All three games in the series are scheduled to begin at 6 p.m.

Brookhaven Academy picked up right where it left off in its baseball playoff series with St. Aloysius, and that was... read more